Under the theme, ‘Joint Operations and Interoperability in maintaining National Security’, Lt. Col Katabazi emphasized that National Security is not only about State security but also human security to abate disease threats, poverty and hunger among others.

He tipped the officers on the key National Security threats and the need by different security agencies to work together to address them.

“To maintain National Security, it is important that the Joint Security Agencies cooperate and work together,” Lt. Col. Katabazi said.

Quoting the words of Pan Africanist and revolutionary leader Capt. Thomas Sankara, ‘A soldier without ideology is a potential criminal,’ Katabazi reminded the officers on course on the need for ideological clarity in ensuring National Security. He challenged them to use the NRM ideological pillars of Democracy, Nationalism, Pan-Africanism, National Unity and Socio-economic transformation in executing their duties. 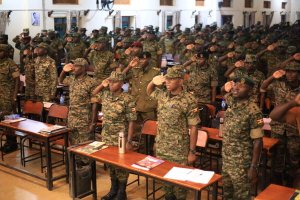 He said that security threats like organized crime, corruption and misappropriation of public funds, land conflicts among others, are a big hindrance to achieving socio-economic transformation and that it is imperative that each one plays their role to fight the threats.