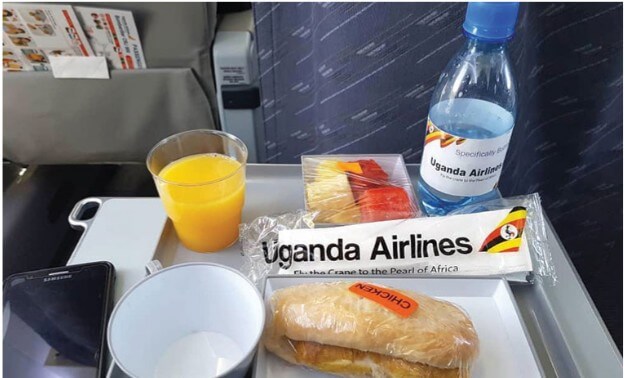 Several  Ugandan brands of eats and soft drinks will make the customer menu at Uganda Airlines so that those on flight enjoy the aroma of Uganda’s freshness.

Local drinks and beverages, fresh juice, eats such as fresh fruits from the Ugandan soil are some of the soft refreshments that those on the maiden flight by the Airlines on Wednesday this week were treated to.

The flight plied Entebbe to Nairobi from 6.00AM and touched JKIA at 6.55Am, five minutes to the expected time, with 8 commercial passengers on board.

Lovers of fruit salad and all manners of soft refreshments will feel great as Uganda, the Pearl if Africa is endowed with freshness all over. Those that enjoy hard drinks have not been left out either.

Among the first brands on the national carrier is Uganda Waragi, a local gin made by Uganda Breweries Limited. The gin is classified as a ‘hard drink’ by the airline.

Jesa Yoghurt, the brand associated with Jesa Farm Dairy Limited of the Mulwana Group is also fixed on the Airline’s menu.

Pundits say however that other local producers have to stand the task of ensuring genuinity and good standard of their products so as to viably be counted among other suppliers of the Airline, as well market the BuBu iniative.

For instance, Pick&Peel, a Kenyan juice brand, is being served inflight because ‘none of the local juice manufacturers so far meets the standard,” according to an Airline official who preferred anonymity.