“We are the second even though we are using primitive methods. Imagine if we used these modern methods, we shall produce more,” Museveni said.

The President commissioned 150 tractors and 100 motor cycles and said that these tractors can provide easy penetration, soften the soils and allow for time planting even in the event of light precipitation. These tractors can plant and also pump water. 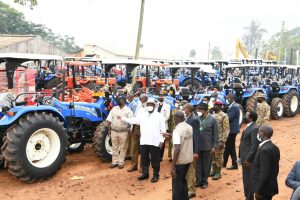 President Museveni thanked the Ministry Of Agriculture for waking up and embracing the modernization of Agriculture. He said that tractors act quicker and dig up bigger farm lands instead of the 4men cultivating for a week and the tractor dying it in an hour.

Frank K Tumwebaze the Minister of Agriculture, Animal, Industry and Fisheries (MAAIF) said that they are determined to increase agriculture production through mechanization and productively through research. 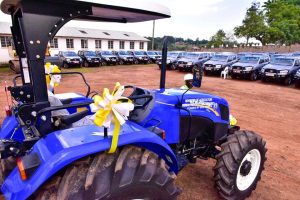 According to the Major Gen. David Kasura Kyomukama, the permanent secretary of MAAIF, the President has continued to guide in promoting the development and commercialization of the agricultural sector as a pillar for middle income achievement for all 68 small holder farmers in Uganda.

The government will train the tractor operators, support the routine maintenance and install monitoring software.

The Government has started the rehabilitation and equipping of the Namalere National Agricultural Referral center to serve as a center of excellence for skilling, training, upgrading and accreditation of equipment and mechanical operators.