Rampant Power Tower Vandalism, Power Outages and Who Is Behind them?

Recently, the nation has been experiencing more power outages than usual which authorities blame on vandalism of power infrastructure.

There have been cases where segments of the network are destroyed out of malice including syphoning of transformer oils causing transformers to burn, removing copper wires within transformers and at times theft of the entire transformer.

Over the last six months alone over 70 people have been arrested in connection to power infrastructure vandalism.

In September 2022, 62 people were arrested in Mityana district with electricity cables, transformers and other items from vandalised electric towers.

Among the arrested, 17 were Umeme staff using a branded Umeme Vehicle which was found with items from the vandalised towers.

In October 2022, just in Busoga region, 95 electricity transmission towers were vandalized and only one person was arrested.

In November 2022, two 132KV transmission lines from the Jinja based Nalubale and 200MW Kira Hydro power plants were vandalized leading to extensive power blackouts in central and western Uganda.

Some parts of the country spent over two days without electricity affecting businesses and the quality of life of people.

On December 5th 2022, Police Spokesperson SCP Enanga Fred said that they had arrested 16 suspects and 22 others were still at large for vandalism of electricity Infrastructure.

The Kampala Metropolitan Police spokesman Patrick Onyango said the suspects told them that the stolen items are sold to the steel mills which smelt them and make other products.

The effects of Vandalism

The public needs to be aware that interference with the electricity supply network causes power blackouts, threatens the security of our homes, increases the cost of doing business and electricity tariffs, and disrupts vital health and education services as well as our lifestyles.

Is it possible for ordinary people without any experience in electricity connections and disconnections to first switch of the transmission lines with heavy voltage and embark on the vandalism?

The fact that among the arrested some were Umeme staff, doesn’t this raise eyebrows on the real masterminds behind these acts of vandalism? 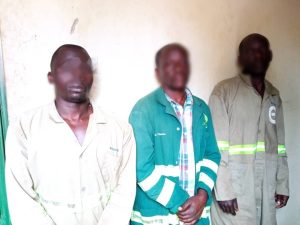 The termination of all contractors countrywide by Umeme in October 2021 could have left many skilled people unemployed and disgruntled. Are they the ones looking for payback?

The fact that Umeme’s contract is expiring in March 2025 and the government has promised not to renew their contract, could the Umeme staff be the ones intentionally sabotaging the electricity transmission?

The general public is called upon to be vigilant and report any suspicious behavior on a power network near them to the nearest police station or the electricity utility company serving you.

Views: 173
Previous article
Medical and Nature Tourism to Elevate Uganda’s Tourism Potential
Next article
President Salva Kiir should be sympathized with not mocked