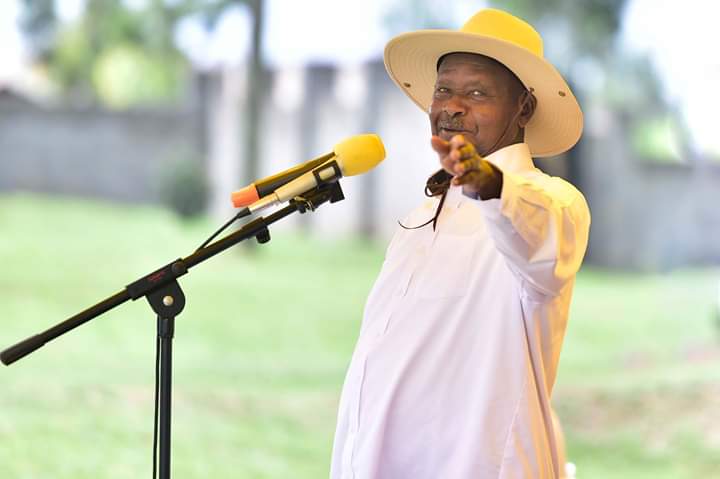 President Yoweri Museveni, in a statement issued Sunday 5 May 2019, reminded Ugandans who wish to exercise their right to hold public gatherings that “public assemblies must be legitimate” and for a good reason.

Referring to the NRM’s 10-point program which comprises of “Restoration of Security of person and property” as its No. 2 core, President Museveni explained why it is the ground for all public meetings, gatherings and rallies to be prior okayed by the Police.

“If you want to assemble publicly or to procession, it must be for a legitimate reason. If it is to preach hate, to decampaign investments in Uganda etc, then we shall not allow you. Those who have ignored this logic have paid a heavy price.”

He advised those who want to hold a “public meeting (olu kungana) or a procession (ekivulu)”, to liaise with the Police so that the meeting or procession does not endanger the lives of other Ugandans or the safety of their property.

He castigated the Opposition for always wanting to hold meetings and processions near markets or through crowded streets, which he sternly warned it will never be allowed.

President Museveni’s clarification on the legitimacy of public assemblies comes in the wake of numerous outbursts by a cross section on the Opposition divide whose meetings/ rallies across the country, a couple of weeks ago, were foiled by Police on grounds of being held illegitimately, contrary to The Public Order Management Act 2013.

Below is President Museveni’s full statement:

Dear Ugandans and, especially the Bazukulu.

Greetings. I am sure many of you had a happy Easter, except for some incidents of crime like the killing of Doctor Catherine Agaba and some accidents. I am now writing to clarify on the issue of legitimate public Assemblies (rallies, ebivulu-processions, music festivals etc.). The NRM, supported by the ordinary Ugandans organized in Resistance Councils (RCs), fought for and has, ever since, upheld 10 points.

– Restoration of Security of person and property;

– Consolidation of national unity and elimination of all forms of sectarianism;

– Restoration and improvement of social services and rehabilitation of war–ravaged areas;

– Elimination of corruption and the misuse of power;

– Redressing errors that have resulted in the dislocation of some sections of the population;

– Co-operation with other African countries;

– Following an economic strategy of a mixed economy.

Point No. 2 was “Security of person and property”.

At a great sacrifice to the freedom fighters (in terms of sweat and blood), we have, largely, achieved, after the more than 50 years of continuous and relentless struggle, security of person and property. Rural terrorism (the Rwenzururu, Kony, ADF, FOBA, UPA, Kirimuttu, Karimojong cattle rustling etc.) has been defeated. You can drive from one end of the country to the other end (North-South, East-West, etc.) on good tarmac roads and in total peace. Meanwhile, on account of immunization, the population of Uganda has jumped from 14 million in 1986 to 41 million today. This at a time when the economy of Uganda had totally collapsed.

In 1986, there was no sugar, soap, salt, clothes, etc. – the so called “essential commodities”. Owing to the skill of the NRM, the economy gained minimum recovery and is on a trajectory of fast growth (one of the fastest in the World), seen by all those whose eyes are not jaundiced by prejudice and ill-motives. This has meant that tax collection has gone up from Ushs. 5billion in 1987 to Ushs. 17,000 billion today. Nevertheless, all this tax money cannot be spent on security and Policing. Otherwise, we shall forget about the roads etc. This, we cannot correctly do. Hence, today we spend as follows:

By prioritizing the roads, electricity, Education, Health, we have had impact as can be seen. The road from Oraba in Koboko to Cyanika – Bunagana in Kisoro on the Congo – Rwanda border is 653 miles – all tarmac. That from Malaba – Busia to Mpondwe in Kasese and Lamia, Busunga in Bundibugyo is 368 miles respectively. All the districts of Uganda today have been reached by electricity – up to the district headquarters, at least.

What does all this mean in terms of policing? With a population of 41 million people, according to World Policing ratios, of one Policeman for every 500 persons, we should be having a Police force of 82,000 policemen. If we do this, where shall we get money to do roads etc.? There is evidence that there is quite a bit of tax evasion assisted by the corrupt elements in URA. That issue will be sorted out. However, until we resolve that issue, we shall have to plan within the Ushs. 17,000 billion that we are collecting today plus the external and internal borrowing that brings our budget to Ushs. 32,000 billion.

The Police force we have now is only 43,000, about half of what we need. It is this gap, plus some corruption within that Police force, that created a window for the spate of unresolved murders of the Sheikhs, Kagezi, Kawesi and Kiggundu. The kidnapers of Susanne Magara were identified, arrested and some were killed in the fight in the Mosque. The Kiddawalime group in Masaka that killed 5 people on New Year’s eve in the Masaka area, were all arrested or killed. Nevertheless, to cover the gaps, we decided to introduce technology – cameras, electronic identification of vehicles etc. This is being implemented. Where it has been implemented, there is no fooling around. Some months ago, those on social media were able to see a cell phone thief who was promptly identified, pursued and arrested. This is a fore-taste of things to come. Crime will be defeated as we defeated rural terrorism.

Coming back to Public assemblies, the original topic of this article. The NRM stand on this is to ensure security of person and property as commanded by point no. 2 of the NRM’s 10 points programme.

If you want to hold a public meeting (olu kungana) or a procession (ekivulu) for a legitimate reason, you should liaise with the Police, so that your public meeting or your procession does not endanger the lives of other Ugandans or the safety of their property. You agree with the Police on the route, if it involves a procession, or the venue if it is an event or a rally. The problem we have with some elements of the opposition is that they ignore this. They want to hold meetings or processions near markets or through crowded streets. This one we cannot allow. It is the core principle of the NRM never to allow the looting or damaging people’s property or endangering their lives. When you do, like some have attempted (the likes of Joseph Kony, Jamil Mukulu, the cattle rustlers in Karamoja etc.), we struggle against you and we shall defeat you. This, of course, is not to speak of the indisciplined Armies of the past regimes that we had to deal with. That is all regarding the issue of Public assemblies. During Easter, I watched on TV numerous processions by Christians in all parts of the country. I do not even know whether they liaised with the Police. I did not hear of any single problem on account of those numerous and big processions. Why? It was because they had no ill-motive (to damage property or attack people) and it was also in holidays with light traffic on the roads. To insist on a procession or an assembly in a market or crowded street is criminal abi initial. This we cannot allow and we have not allowed in the past. That is one of the reasons Uganda is growing at more than 6% per annum. Other parts of the World are growing at 2.3% (World Bank figures). The last looting of People’s property that we had was in 1979. Looting will never happen again, in the towns, under the NRM. With our present capacity, looting cannot happen again even in the rural areas. Looting of people’s property, under the NRM, only happened, on a large scale, in the insurgency areas before we defeated the terrorists.

All this, however, is on assumption that you are rallying, you are processioning for a legitimate reason – a justified reason. You cannot be rallying and processioning for an illegitimate reason – preaching lies, preaching sectarianism, preaching hate. Those who made mistakes to tolerate such bogusness, paid a heavy price. Did you see the massacre in New Zealand? How about the ones in Sri Lanka recently, in France, in Belgium, in Norway etc.? How about the mega problem that occurred in Rwanda? These tragedies in those areas started with pseudo – and bogus preachers.

At the beginning of our Administration, I had to handle the delicate issue of freedom of Worship on the one hand and bogus and dangerous preaching. We handled it correctly and firmly. On the one hand, I found difficulty in agreeing with some in the traditional faiths (the main stream Moslem, Catholics and Protestants) who argued that the new Churches were misleading people etc. I really could not be an arbiter in the issue of who was more-godly than the other. The acid test for me was simply that whatever you preach, do not break the laws of Uganda. These laws are constructed around the legitimate positions, justifiable positions, issue by issue.

The Churches were arguing about performing miracles, about what will happen when we are dead etc. These are matters in which we had no competence to adjudicate. However, there were clear earthly phenomena in which we were over-qualified in terms of competence to handle. When, therefore, Mzee Bishaka of Kibaale preached that people should not go to hospital for treatment and that he will cure them by miracle, I locked him up under one of the relevant laws. Indeed, one person had died on account of listening to that dangerous preaching on matters which were clearly earthly. Thereafter, we became very good friends and he went on with his religion which actually preaches unity because their slogan is: “enyahukana zihwaireho – sectarianism is dust binned – no longer there”.

Therefore, if you want to assemble publically or to procession, it must be for a legitimate reason. If it is to preach hate, to decampaign investments in Uganda etc., then we shall not allow you. Those who have ignored this logic have paid a heavy price.

Besides, it is really criminal to get actors who create unnecessary controversy when Uganda is making so much progress. Of course, there are also problems. However, the problems we have today are problems in progress. The problems we had in the past were problems in decline of the economy and country. Only the enemies or the uninformed can be unhappy with the progress of Uganda. What is legitimate is to say that Uganda can even do better. That is well intentioned criticism. To say that Uganda is collapsing and declining is dishonest or uninformed. I totally reject that dishonest audit and can prove it to the people.

However, I also disapprove of the method the Police used to break the glass of Bobi Wine’s car. They should have towed the vehicle to wherever they wanted him to be. I do not watch TV most of the time because of work.

PRESIDENT OF THE REPUBLIC OF UGANDA