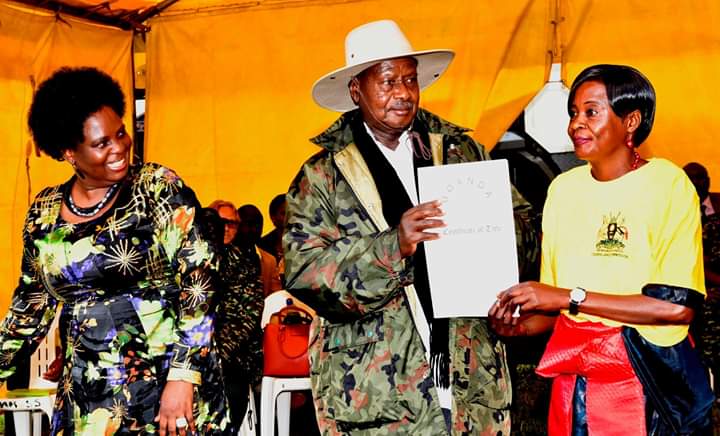 President Yoweri Museveni has strongly warned landlords who take advantage of the illiteracy of bonafide bibanja occupants and continue to illegally evict them from their bibanja saying that their actions are unlawful and will definitely face the long arm of the law.

The President was speaking at a function where he handed over 301 land tittles to 301 bibanja holders that government has procured for them from the landlords at a cost of Shs.2.5 billion using the Government’s Land Fund.

He described a bonafide kibanja holder as one who either bought or was given by the original landlord; one who was on the kibanja before 1983 or anyone who bought or inherited from the two above.

He, at this point, instructed Resident District Commissioners, the Police and local leaders to oppose and stop the eviction of bibanja holders by landlords.

On reports that the landlords connive with the Courts of Law to secure eviction orders leading to eviction of bonafide bibanja holders, the President said that he had had a discussion with the Chief Justice on the matter and a lasting solution was in the offing.

He, however, asked the population to stand firm and resist all forms of intimidation and oppose evictions by landlords because they are clearly protected by the law.

He equally warned those who buy land tittles from landlords, banks that accept land tittles for mortgage that they risk losing their money because land on which there are bibanja holders does not solely belong to the landlord.

President Museveni explained that Uganda’s land law was designed in a win-win situation re-instating and recognising the status of landlords as owners of the land that had been removed by the Amin regime land decree of the 1970s.

He added that in recognition of the powers of the landlords, the government recommended a token of appreciation, not a commercial rent, to be given by the bibanja holders to the landlords annually so that the two live in harmony.