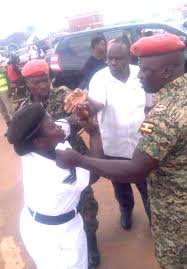 Police has summoned and charged the Ugandan Ambassador to Burundi, Rt. Maj. Gen. Matayo Kyaligonza for assaulting a traffic Policewoman.

The retired general and his bodyguards on Sunday morning physically assaulted Sgt. Esther Namaganda in Seeta, Mukono when she prohibited them from making a traffic offenc

The body guards that were filmed while man handling the traffic officer by a mobile phone onlooker have already been arrested and detained at Mbuya. The Officer that was assaulted is called Sgt. Namanda.

The Police said that Kyaligonza will be summoned through the foreign affairs Ministry in respect for protocol.

“The Police will cause possible summon to H.E the ambassador General(Rtd) Matayo Kyaligonza through the Ministry of foreign affairs on probable charges of assault and wrongful obstruction of an officer on duty,” said the Police in a statement.

Police has praised the assaulted officer and created task teams to follow up the case which will include examining the conduct of the driver and charges of assault and obstruction of an officer on duty.

Meanwhile the video clip of the incident is making turns on the social media attracting criticism from several viewers, most of them blaming General Kyaligonzas bodyguards for impunity.