The Forum for Democratic Change has faced several challenges within the party leadership especially amongst its leaders ranging from several endless Netflix-like scandalous sex fests, headline exodus pivotal leaders, corruption, several on and off courtships with other ailing political parties among other factors.

According to contacts close to FDC, the party is facing yet another major challenge that could lead the already on ‘life support’ party to its final demise. Close sources have confirmed that the already torn and divided party members are on a high horse to kick out Hon Nandala Mafabi, one of its strongest limbs, loyal and longest serving leaders. This came after several accusations within the party that the veteran Politician is in bed with the NRM alleging that he has been a long serving mole.

As these accusations intensified, some anti-Nandala factions have vowed to throw him under the bus and eject him from the party’s big table beginning with stripping him of the Secretary General juicy spot.

These allegations have spread on social media like a wild fire with some shockingly acknowledging the much anticipated “drama” series to unfold.

“Underground efforts to eject Nandala Mafabi as secretary general of FDC likely to throw the party in even more turmoil than Gen. Muntu’s exit did. Mafabi will fight back using NRM money bags. The tension at the top in FDC leadership can only weaken the party further. Who bewitched this party?” tweeted Okuda Ivan, a lawyer at Anguria & Co. Advocates.

Some analysts have blamed the imminent FDC implosion on the fact that FDC was hinged and based on an individual, Kizza Besigye whom they claim used “his” party like a baby playing with its beloved toys. In this sense, a baby plays with its favorite toy until he cannot anymore either because the toy is damaged or the baby got a different new toy to spoil. 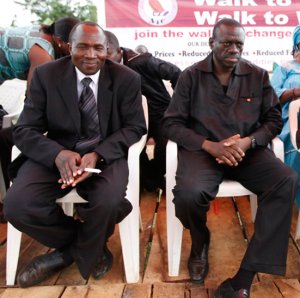 “The character of Kiiza Besigye is that he created a party around himself, so the infighting is unintended consequence of his attempt at being honorable unlike his old friend. What Mafabi cannot accept is that the center cannot hold and things have fallen apart,” said Darn Okare, a political analyst.

However, some argue that FDC’s woes emanate from its inception and lack of strong foundation and its continued lack of ideology.

“FDC is just a party in papers. It was an assortment of bitter people who had personal grudges against Museveni. A party without base or even a known ideology and moles are the only language,” said Oyite Emmanuel.

Many unanswered questions have therefore been left lingering in the staunch followers’ minds. Is the party worth saving? Is there anything that can be done to resurrect the regime’s once biggest ‘pain in the ass’ and who is to blame for the mess at the Najja based offices?