The NRM Secretary General, the Rt Hon. Richard Todwong has hailed the Communist Party of China General Secretary and President of the people’s Republic of China H.E Xi Jinping for the tremendous support given to African countries, Uganda inclusive, which has steered development.

Twodwong hailed China as a dependable partner for all progressive African political parties and organizations that stand for socio-economic transformation of their people.

“The people’s Republic of China today, is one of Africa’s largest donors, investment and trading partner whose loans and grants have benefitted large infrastructural projects such as roads, energy and industrial parks.”

The meeting between CPC leaders and African political parties was held via Zoom video conferencing. 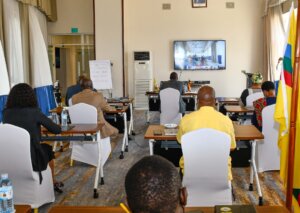 Uganda boasts of strong bilateral relations with  the People’s Republic of China which has fostered trade and development between the two countries.