It is time for the Music world to evolve and embrace hosting virtual shows during the Covid 19 pandemic . 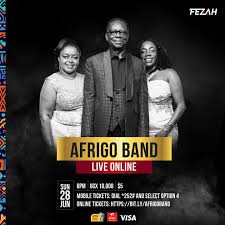 Last week, Isaac Uchi, a renowned music artist took on his social media to express how serious covid 19 can be real after he was found positive with it.

He said that he was one of the people that always said “Nay… have u ever seen anyone you know that gat covid 19?” unitl he contracted the disease and found himself in intensive care unit Mulago.

He called upon all fellow musicians and artists to take serious this pandemic and protect their fans in an online interview with Live wire Kalakata show on NBS TV.

A week after, promoters and events managers are threatening to storm statehouse in demonstration against being stopped from holding events and music concerts. As if government is the author of this pandemic.

The president has stated that this war against human life and collective effort to respect the Ministry of Health guidelines should be followed. Of course some politicians are not as credible as the President, they keep endangering the electorates but that’s another story for another day.

However, the question is, is the music and entertainment industry competing with politics in killing people? The answer is simple and precise. The music world must evolve. Embracing technology and ICT developments should be a way to go in the path to make money out of the industry. This should not sound crazy because it is tested and can work.

Many artists across the globe are making ends meet by hosting online events. Electronic tickets are being purchased and youtube channels yielding a lot of revenue for artists. Whereas physical gatherings could be fan for both ends, it’s unfortunate that this can’t happen.  We are at the frontline, this is war! In the President’s Voice.

In any case, Coca cola studio was here, it was a virtual event aired on Tvs and social media channels. A lot of money was made and I can confidently say that I was a big fun and never missed any episode. This can be adopted to keep the industry alive. Why don’t these promoters ask Kitaka of Fezah Invents. In Uganda, Fezah has been selling electronic tickets and hosting different artists including my favorite Afrigo band ,Micheal Kitanda, Lillian Mbabazi and Brian Lubega. I bought those tickets and can testify that the shows were even better than physical shows. The sound was legit, the lighting was on point that for once I realized that I was watching the show as a VIP instead of the Physical shows where I always sit behind.

What the Promoters should be doing is to sensitize the funs on which trend the music world is taking other than insisting on endangering them, unless they are working for political gains and lime light.

Share
Facebook
Twitter
WhatsApp
Previous articlePatrick Amuriat contradicts with Besigye, plans to do what failed
Next articleNot all that glitters is Gold, Mps that defected to NUP seek audience to return to their parties