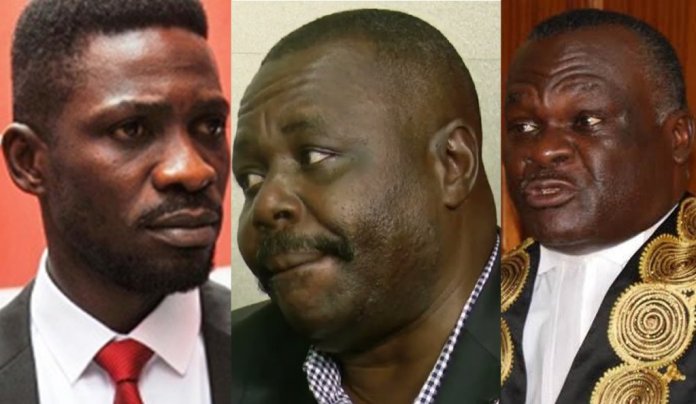 A spirit of darkness and sadness troubled Uganda after it become clear that the Rt Hon. Jacob Oulanyah had passed on from Seattle in United States of America.

Many politicians including those who had previously sharply criticized his treatment abroad made abrupt U-turn and embarked on unrealistic mourning in addition to crying louder than the bereaved.

On Thursday, the same team who condemned Oulanyah foreign treatment were seen at Parliament shading tears and openly mourning the deceased who they had vehemently attacked for seeking quality treatment abroad.

Outstanding is NUP leadership which even mobilized demonstration against his treatment while in Seattle.

Hon. Kyagulanyi as any other political leader seeking to remain relevant has taken on the issue and turned into one of his new song release.

Recently he posted, “led a team of NUP leaders to sign the condolence book for the Rt. Hon. Jacob L’Okori Oulanyah at Parliament. We continue to mourn this fallen son of Uganda.May his soul rest in peace.”

He claims to have reached out to the family to convey his ‘sorry,’ however continues to laments and cause grief to the family by making uncalled for utterances as witnessed at the burial of Walukaga’s father.

This makes his public comment a crocodile tears stunt since he openly attacked government and Oulanyah himself over his attempts to secure better medical treatment and now won’t let the deceased rest.

His outburst seems to suggest that his sentimental approach to politics was being fed by the suffering of Oulanya’s death. What happened to ethics? What happened to the respect for the dead? How about considering the grieving family. Why break the already broken hearts.

The other crocodile tears personalities are Odonga Otto who openly and vividly has fought Oulanyah as long as he lived.  He even criticized the move to take him to hospital.

On 9th February 2021, the former Aruu County MP in Pader District, sharply criticized the decision to airlift late Oulanyah for treatment in the United States.

“The issue is that if you are to fly 44million Ugandans with similar health concerns to USA hospitals you will need 88 trillion shillings and yet Uganda’s total budget is 44 trillion shillings. Build health centres Home simple,” Odonga Posted.

On 24th March 2021, the EX legislator changed his goal post and sharply attacked NUP and others who had previously attacked government for taking the deceased abroad for treatment.

Santa Okot MP of Aruu is another controversial figure who doubles as ex- mother inlaw that has come out to demonize and disrespect thedemised MP by claiming that he did not take care of the children he shirred with her daughter. The failed marriage of late Jocob Oulanyah is reported to have failed due to the intervention of this same Santa and yet here she is calling for a witch crafty kind of burial that will keep the Speakers spirit alive to haunt his oppressors.

The Chief Justice in a bid to call for unity said that people against Oulanyah don’t represent their tribe.

Whichever tribe that we come from, death is a bitter thing to deal with. We need moments to mourn when we lose our loved ones. It’s time to throw way hypocrisy and demonstrate a level of maturity that allows for the soul of the deceased to rest.

Where did our morals go? It’s time to go silent in respect for the dead and the grieving family.  In moments like that’s what is needed.

The bible in the book of 1 John 2:11 says; “But whoever hates his brother is in the darkness and walks in the darkness, and does not know where he is going, because the darkness has blinded his eyes,” we desist to be blinded by darkness.

Uganda is a home for about 54 tribes that speak different languages with about 9 indigenous communities that formally came to recognition and with inter marriages among tribes, you find we are one in one way or the other.

Tribalism and sectarianism are detested beyond our national constitution and it’s a punishable offense under the laws of Uganda. Why of all times do we peddle such sentiments in times of mourning?