“…..accordingly, the President of the National Unity Platform has with immediate effect suspended Moses Bigirwa from his respective office. While on suspension, he is not expected to carry out any functions of his office or purport to represent the party on any platform and in any capacity,” part of the statement reads.

Bigirwa the People Power diehard and Bobi Wine’s blue-eyed boy at the time of his suspension from the party, has been serving as the NUP Deputy Secretary for Mobilisation, Eastern Region.

According to sources within the two camps, Bigirwa’s troubles started in September 2022 when he accused the NUP top leadership of sectarianism and segregation when dealing with several other party leaders and supporters.

Bigirwa’s accusations followed claims that NUP top management had paid a deaf ear to his request for support towards his wedding function. He claimed that his superiors segregated and abandoned him yet the party supported other leaders such as Nubian Li, Francis Zaake, Fred Nyanzi, and Joel Ssenyonyi on their weddings.

“I have understood people are not the same in the party. I don’t know whether they are tired of me but in most cases actions speak louder than words. I have learnt something because there is a saying that your network is your net worth. Now I have done evaluating myself,” Bigirwa stated. 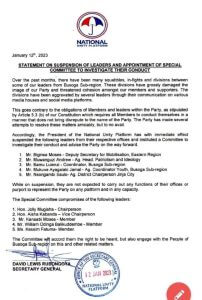 However, NUP leadership claims to have indefinitely suspended Bugira and others because they were creating in-fighting and divisions amongst the party supporters.