With the Allied Democratic Forces (ADF) finger prints on the last year’s bomb explosions in Kampala which claimed lives of people, the Uganda Peoples’ Defence Force (UPDF) through its strategic militant operation called Shujaa has continued to launch cantankerous attacks on the armed rebels basing in the heart of the Democratic Republic of Congo (DRC) jungles.

The successful UPDF operation suffocated the rebels which forced many of them to flee the jungles while some remained in hideouts.

While appearing on one of the local television, the Defence spokesperson Brigadier General Felix Kulayigye said that it was a miscalculation for the remnant ADF rebels to attack Ugandan locals of Kyanja village in Ntoroko district in the western part of Uganda.

He added the rebels heard about the numerous engagements of the UPDF in different areas of the East African region like in Somalia, DRC to sweep away the M23 and the ADF remnants, so they thought it was a suitable hour for them to attack the UPDF barracks little did they know UPDF was on alert and had more than enough officers in its reserves.

“The rebel attack on the people in Ntoroko was aimed at diverting the concentration of UPDF fighting against the ADF rebels in the DRC. It’s also called the ‘circumference’ style of fighting where the enemy attacks from the back to distract the forward advancement,” Felix Kulayigye said.

He also said that within thirty minutes, the rebels were intercepted by the UPDF commandos through exchange of gun fire and as of yesterday  in the late hours,17 rebels were sent back to their creator, over 12 were captured alive, 11 guns, phones and other related property was captured. 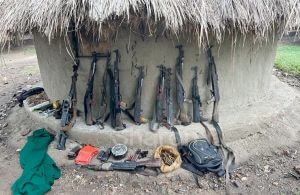 During the interview, Ibanda Gerald Rwemulikya the Member of Parliament for Ntoroko testifies that there was exchange of gunfire between the ADF rebels and the UPDF soldiers for the whole day and some rebels were seen crossing the River Semuliki back to DRC using fishermen boats.

He added that due to intensive hunting by the UPDF fighter jet, some rebels drowned in the river as others were put out of action.

The UPDF spokesperson yesterday night said that the operation is ongoing in scuffle hotspot areas like Kyanja village in Bweramure Sub County in Ntoroko district and the porous borders of Uganda and DRC to ensure that there is no more infiltration of rebels into Uganda.

“The combing of the area is still ongoing as we encourage the locals to go back to their homes for settlement,” Kulayigye said.

This comes at a time when the commander in chief of the Uganda People’s Defence Force (UPDF) retired General Yoweri Kaguta Museveni  is in Washington DC at the invitation of H.E President Joe Biden, for the US-Africa Leaders’ Summit to defend the interests of Africa, East Africa and Uganda in the particular.

The President has remained silent on this attack, however, no one knows what will happen to the ADF rebels, should he return to the country to guide operations, an area he understands most.

From the clips making rounds on social media, a soldier interviews a bunch of captured child rebels whose facial expressions show no remorse nor fear or detect the trouble they have got themselves into.

The filthy looking and quite dirty children are asked to mention their names. They struggle with mentioning the names they use as ADF operatives and their home original names, a clear indication that these children have been radicalized into extremism.

In another clip, several rebels including quite young ones clad in rebel uniforms and carrying guns, lay dead after the fire exchange.

The front line knows no child so long as they are carrying guns and exchanging fire. Maj. Gen. Dick Olum, the Commander of the Mountain division battalion said that they look like children but they are soldiers, a statement which is not questionable.

In the video clip, one child who confesses to be 12 years old also reveals that he is from Arua and mentions his Dad’s name.  The question is how do these children get recruited and what can be done to stop ADF abductions.

Proposition; What to be done to curb children from joining rebels

Parents from places neighboring Congo must be on the watch and report any missing children since it is evident that the remnant ADF targets recruiting toddlers into their force.

The government too should widely sensitize means of surrendering so that given opportunity, we could see more rebels come out. Rehabilitation Centers for captured child rebels should be well equipped and most importantly a well-developed data base for missing children should be developed so that these captured rebel names can always be crosschecked.