625 Students to Benefit from the Students Loan Scheme

The Minister of State for Higher Education, John Chrysestom Muyingo has officially released the list of 625 Students to make the ninth (9th) cohort of Students Loan Scheme beneficiaries for academic year 2022/2023.

The Minister announced the Student Loans 2022 beneficiaries by the Higher Education Students Financing Board (HESFB) at Uganda Media Center on Tuesday 6th December 2022. 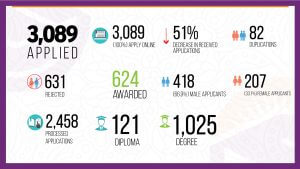 “I am happy to note that the 625 Beneficiaries being added to the Scheme today increases the number to 13,405 loan beneficiaries,” Muyingo said.

He added that there’s a very high chance that many of these students would have missed out on higher education if it were not for the government of Uganda.

“With the government of Uganda Sponsorship Scheme only able to support 10,000 learners on both Diploma and Degree programs, the Loan Scheme was introduced to enable our most needy students to access funding under a loan arrangement and create a sustainable funding model,” Muyingo added.

Mr. Michael Wanyama, Executive Director of HESFB noted that the journey for the selection of the Student Loan Beneficiaries for this academic year 2022/2023 started on 18th July 2022, when interested applicants were invited to send their applications.

“We gave the applicants one month in which to apply, however we had to extend it to up to 15th October 2022 hoping that all the university and Tertiary Institutions would have completed the admission process and issued out admission letters which is a prerequisite for one to apply,” Wanyama said.

Dr. Charles Wana-Etyem, the newly appointed Chairperson of Governance on the HESFB said that the board received a total of 3,089 applications as compared to 6,256 applications received in the academic year 2021/22. 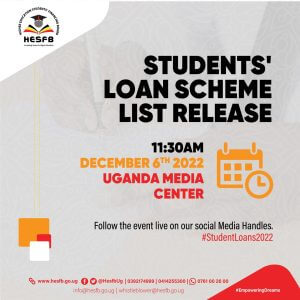 He added that the decline in application by 51% was due to Covid-19 pandemic.

Wana-Etem appreciated the continued support from the Minister of Education and Sports, Janet Museveni, and minister Muyingo noting their contribution towards the initiative.

This year’s release brings on board the 9th Cohort of Loan Scheme Beneficiaries since the Scheme was inaugurated by President Yoweri Kaguta Museveni in 2014.

The Students’ Loan Scheme was born out of the 2011 Presidential Manifesto following the success of the initial universal education initiatives which brought thousands of learners to the education cycle.

Views: 41
Previous article
12 Arrested in Fort Portal over the Murder of a Medical Officer
Next article
“Life imprisonment means being jailed for 20 years,” Constitutional Court declares