Four people have been charged over Uganda Corporation Lands in Lira District. 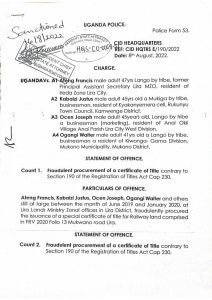 Francis Ateng, the former Principal Assistant Secretary at the Ministry of Lands Zonal Office in Lira District, appeared before the Chief Magistrate Court in Lira District on Thursday.Three of his co-accused are still at large.

He has been charged with fraudulent procurement of a certificate of title, forgery and uttering a false document on Uganda Railways Corporation land in Lira. Ateng has also been remanded to Lira Central Government Prison and is charged with three others who are still at large.

He was arraigned in Court by the State House Anti-Corruption Unit in liaison with Uganda Police Force.

The investigation followed a directive issued earlier this year by H.E the President to the unit to investigate corruption-related allegations at Uganda Railways Corporation.

“Upon conclusion of the investigations by the Unit and submission of a report to H.E the President, in a letter dated October 3rd, 2022, the President directed, among others, that all persons who were behind the attempt to steal Uganda Railways Corporation Land in Lira be prosecuted,” a source said.