Hon. Nathan Nandala Mafabi, Secretary General of FDC and MP of Budadiri West in Sironko District, wants to shake up FDC leadership by fronting himself as the next party President.

The assertive and argumentative Mafabi who famously known as “Majegere” (crowd puller) in local politics has made it known to a closed group that he intends to vie for the FDC presidential seat come 2026.

“I am going out to bring ‘Bundizi’ (short, bright yellow sweet bananas), we as FDC, have lost members during the current tenure, we need to change this and I’m the man to do that,” said Mafabi.

Mafabi has been referred to as “Bundizi” or ‘Majegere’ in Bugishu region since 2001 and Peter Munda a political analyst in Sironko, Bumsui Parish in the region says he is going to use the same energy and slogans to win the FDC party presidency. “He keeps telling people that he is going out in his garden to bring ‘Bundizi’ to share with them, a promise he has kept all these years. Whenever he returns, he shares his gains with them from parliament, I have no doubt he will do well as FDC party president,” Munda said.

According to the FDC National Chairman Wasswa Birigwa, the FDC leadership summoned over 250 delegates in November 24th– 25th 2022, to Najjanakumbi from across the country to evaluate the party’s performance, politically, economically, and socially. During the meeting it was discovered to their disappointment, that the party was working in reverse under the leadership of Hon. Patrick Amuriat Oboi as the party President.

“The party which fronted Col. Dr. Kizza Besigye polled 35.61% in 2016 and became the biggest opposition party. Shockingly in 2021 under leadership of Eng. Parick Amuriat Oboi within just five years the party dropped to 3.24%,” said Birigwa.

It is from this background that most Party leadership and supporters have encouraged Mafabi to run for the presidential seat and promised him support towards taking up from the lukewarm Amuriat who under his tenure has lost credibility and members at a high rate. 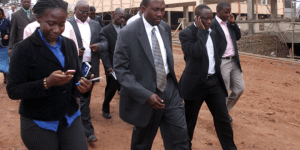 “We hope that he will promote reconciliation, unity and provide effective leadership that will not seek selfish interest at the expense of the people,” a member of NEC stated.

Mafabi made his mark and name as the chairman PAC, and Leader of Opposition in parliament, and hopes his previous positions held will help market him as he is not new on the political scene.