Over the weekend, while checking in for the Eddy Kenzo concert at Kololo independence grounds, I realized security was on high alert and one could easily mistake it to be a Common wealth heads of state meeting due to the security check points and surveillance on the ground.

The inconveniences of going through check points coupled by the presence of huge scary sniffer dogs reminded me that on 16th November 2021 at around 10:03 a.m., three suicide bombers rocked Kampala in a twin bomb attacks within three minutes of each other where four people lost their lives and over 33 were injured and this easily justified the heightened security.

Increased deployment of security organs in urban centers and public places after the November 16th 2021 attacks is also an action from the lessons learnt from previous terror attacks.

Amplified vigilance of the Ugandan population both in urban and rural areas justifies that people are now most likely to report any suspected objects in wrapped bags and “buveeras” to the nearest police post and also report unknown suspected individuals in the community.

Prior to the November attacks, there had been another bomb attack in Komamboga zone Kawempe division in October where revelers at a pork joint were hit by a nail bomb which killed one waitress and left 5 people injured.

Barely a month later, on November 16th 2021, three suicide bombers targeted the city center where the first bomber blew himself up at checkpoint of the Central Police Station (CPS) just opposite Kooki Towers building along Buganda Road, killing two people and injuring several others, including police officers at the entrance of the police station. 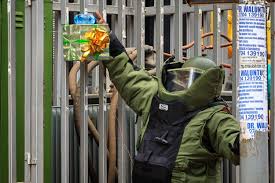 Two other bombs then exploded at Jubilee House along Parliamentary Avenue about 100 meters from the entrance of the Parliament killing two more people and injuring many others. 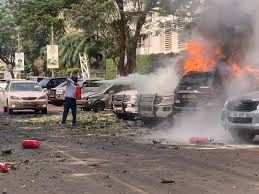 The Islamic State claimed responsibility for the attacks.

The days that followed, Police rounded up many suspects and these were charged in the courts of law and some sentenced in January 2022.

The President of Uganda in his address said that; “it was a miscalculation by the schemers to attack a country led by a general of the Original National Resistance Army”.

The President added that “The terrorists invited us and we are coming for them,” he said on his Twitter account.

After connecting the attacks to the Allied Democratic Forces (ADF) who were sponsored by the ISIS that had claimed responsibility of the attacks in Kampala, the President of Uganda ordered for an immediate pursue of the ADF who were hiding in Congo.

14 days after the 16th November attacks, operation code named Shujaa was launched on November 30th, 2021 with the bombardment of ADF bases in eastern Congo.

Back in Kampala, security was heightened with more installments of security cameras, security check points in all public places, increased vigilance by nationals through reporting any suspicious items and arrests of terror suspects and above all, impounding all motorcycles with unreadable registration plates on grounds of being mostly used in carrying assailants involved in committing crime in communities.

Addressing journalists during a weekly police briefing this Monday the 14th of November 2022, Fred Enanga the police spokesperson said terrorists have a habit of executing repeat attacks on anniversaries of fatal attacks and the general public should remain vigilant. In 2010 during the world cup final, Al-shabab terrorists targeted Kampala rugby club which was showing world cup finals on big giant screens and killed over 74 people.

As the 2022 Qatar world cup starts on 20th November 2022, the Uganda police has cautioned Ugandans that as they visit different places to watch football, they must remain vigilant and also report any suspicious individuals and items that could look harmful to the peace of Ugandans to the nearest police station.

According to the joint security forces, Uganda is safe and secure and by working together terrorism can be defeated.