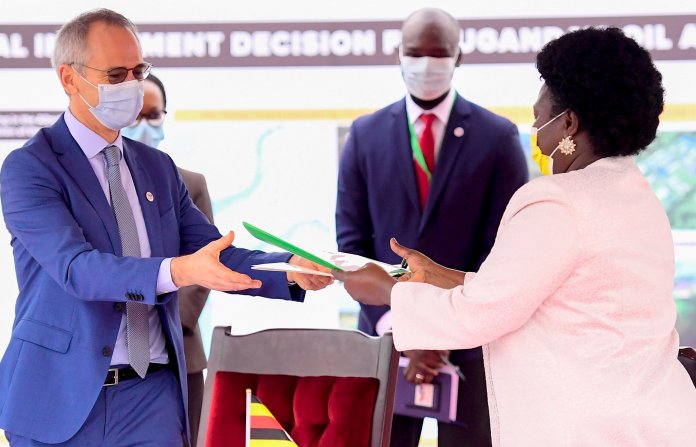 KAMPALA: President Yoweri Kaguta Museveni is optimistic that Uganda’s oil and gas project will go a long way in boosting the country’s economy.

This after the French energy conglomerate Total Energies and the China National Offshore Oil Corporation – CNOOC reached a deal with Uganda and Tanzania to invest more than US$10 billion in developing crude oil production between the two East African countries.

“This project is a very important one for this region. You hear that for the next few years, Mr. Pouyanne (Total Energies Chief Executive) and CNOOC people are going to put in US$10 billion in this effort. This money will boost our economy, “he said.

According to the President, whereas Uganda discovered crude oil reserves in 2006, oil exploration efforts in Uganda date back as far as 1920 by the British after seepage of oil was discovered at a place called Kibiro near Lake Albert. But their efforts to trace the origin of the seepage failed after 36 years of searching between 1920 and 1956. He resurrected the search for oil when he captured power in 1986.

“When I came into the government in 1986, I read the file where a British commissioner of geological survey in 1956, wrote and said – it seems the oil was there but it evaporated and went away and closed the file. I wish that file could be found and put in the museum,” he said.

He later took it upon himself to train Ugandans in petroleum and geology after Shell BP, a British petroleum company, showed interest in exploring Uganda’s oil at a time when no Ugandan had knowledge about exploration.

“This was the decision I took because I did not see how I could allow Uganda to be involved in something like this with ignorant people on my side, ” Museveni said before introducing historicals in Uganda’s oil exploration journey that included among others; Ernest Rubondo, the Executive Director Petroleum Authority of Uganda and Former Permanent secretaries Ministry of Energy and Mineral development Mr Fred Kabagambe Kaliisa and Robert Kasande who he sponsored to train in oil studies.

These together with oil exploration companies like Heritage and Tullow later succeeded in their discovery in 2006 but production has been repeatedly delayed by disagreements between the government and oil firms.

The final investment decision was announced Tuesday by Total Energies Chairman and Chief Executive Patrick Pouyanne in the presence of other joint venture partners in Uganda’s Oil and Gas sector.

“In the name of the joint venture partners and in the name of Total Energies, I declare the final investment decision for the Lake Albert development project; Tilenga, King Fisher and East African Crude Oil Pipeline (EACOP) project,” said TotalEnergies Chief Executive Patrick Pouyanne said at a ceremony also attended by a delegation from the People’s Republic of Tanzania led by the Vice President Philip Isdor Mpango.

Vice President Mpango said with the implementation of this shared project, the two countries are set to increase their foreign direct investment flows in addition to the trade between the two countries that more than tripled to over 260m dollars in 2020 compared to the average for the past 5 years.

He reiterated commitment from the government of Tanzania to support the project and urged the people of the two countries to take ownership of the project by ensuring security and safety of oil infrastructure.

President Museveni thanked the president of the United Republic of Tanzania Samia Suluhu Hassan and his predecessor John Pombe Magufuli (RIP) for accepting to be part of the project and buying 15% of the shares.

“When this oil project came, I was very happy to see that it goes through Tanzania so that our Tanzanian brothers and sisters also benefit something, given their great contribution (thru Mwalimu Julius Nyerere) to Uganda. Mwalimu Nyerere supported Uganda and Africa as a whole. It is good that his people will benefit from this pipeline, “Museveni said.

The agreement between the government of Uganda and Total Energies will cover the development of oil fields, processing facilities and a pipeline network in Uganda, plus an export pipeline through Tanzania to carry landlocked Uganda’s crude to a port on the Indian Ocean.

Out of the $10 billion, $3.5 billion will be spent constructing a heated pipeline linking oil fields in western Uganda to the Indian Ocean port of Tanga in Tanzania. At 897 miles, the pipeline will be one of the world’s longest.

“This milestone puts us on the path to first oil in 2025,” Minister of Energy and Mineral Development Ruth Nankabirwa Ssentamu said in a speech ahead of the signing adding that close to 160,000 jobs are expected to be created during the project’s development.

The ceremony in Kampala, marked by fanfare, was also attended by the Vice President of Uganda Maj (Rtd) Jessica Alupo, Ministers and stakeholders in the oil and gas from Tanzania and Uganda.