Zaake’s threats to cause rise ups is a sign of early failure by NUP to legitimately compete against H.E the President Museveni 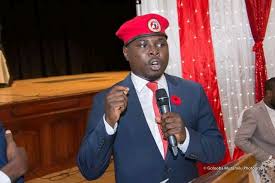 Hon. Zaake Francis while appearing in a press conference said that should police dare to arrest Hon. Robert Kyagulanyi on 3rd November 2020, it will mark the beginning of a revolution.

He threatened that 3rd is the official day of kicking off the revolution with violence. His insinuation is a clear indication of fear and lack of confidence in their manifesto and development plans for the electorate.

It should be noted that the Electoral commission issued guidelines against having crowds escorting candidates to the nomination center. This guideline has been today been followed the President who was duly nominated without causing any crowds and gatherings except for the by stander on the way.

There have been reports that NUP has plans to gather boda boda men and crowds from all over the villages of Kampala to escort Bobi wine on his way to Kyambogo for nominations.

Should this happen as reports of that mobilization have indicated, the police will have no option other than to separate the nominee from the crowns by taking him to Kyambogo and later on to his or her home.

People power which feeds on the power of rowdy crowds has realized that the peaceful nomination process will not work for them and have opted to prepare in advance how they will accuse the forces for illegalities after provoking them.

I am writing in no authority to predict what will exactly happen tomorrow but what is clear is the fact that Zaake coming out and threatening an uprising is very extreme because Ugandans are peace loving and that is the reason why we have several candidates legitimately contesting for the office of President of the republic of Uganda.

The country has experienced a number of youth clad in yellow and very strongly supporting the NRM and several of them participated in the youth elections which they won with over 78 per cent.

The assumption that Zaake and his colleagues can start up an uprising is far from the truth on ground and is meant to culminate fear in the silent majority who secretly vote H.E President Museveni term after term.

When we take zonal statistics, NRM is still the most popular political party.  There is no any constituency across where we have unopposed candidates except for NRM. An example is the MP elect of Buyanga county Ssemwanga Jjavira, a fresh graduate from Makerere University who attributes his life journey to the good education programs by the NRM government. The same programs on which Bobi wine was able to attain a scholarship for a diploma in MDD at Makerere University.

For a whole constituency and several others to trust youth into holding the member of parliament flag is a big sign that the younger generation is determined to work towards a secured future. And for Hon Zaake to threaten an uprising is a sign of fear and early defeat fever.