The government of Uganda through the office of the Prime Minister (OPM) has finalized arrangements to have a science laboratory, classroom blocks and latrines constructed at Midigo Secondary School in Yumbe District.

According to Braham Ojok, the Principle Assistant Secretary to the Chief Administrative Officer (CAO) Yumbe who represented the CAO at the function, the construction of a science laboratory, one block of three classrooms and two latrines is under Development Response to Displacement Impact Project (DRDIP).

“The construction will cover a science laboratory, one block with three classrooms and two pit latrines under the Development Response to Displacement Impact Project,” he said.

Ojok said that the site where the construction is going take place was handed over to Ashanty Business Services as the contractor on Monday, 28th November 2022. 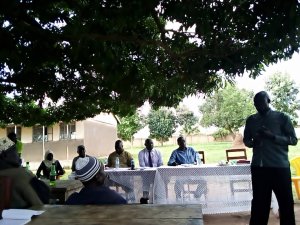 He added that the project is meant to improve on the school structures thus boosting the education system in Yumbe District.