YOU GIVE ME LECTURES ABOUT DEMOCRACY, WHAT ARE YOUR CREDENTIALS? PRESIDENT MUSEVENI BLASTS FOREIGN ACTORS 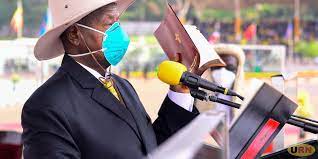 President Museveni has said Uganda will only accept advice from its African peers and from the West if it is done through mutual respect.

While giving his acceptance speech after being sworn in for the sixth elective term as the head of state for Uganda  at  Kololo Independence grounds on Wednesday, President Museveni told over 12 African heads of state and other dignitaries that Uganda initiated its own democracy that is one of the best in the world.

He prided in the fact that he led the National Resistance Army (now UPDF) which fought for 16 years to ensure Uganda attains democracy whose fruits can be seen by everyone today.

“We diagnosed this system not from air conditioned rooms but from jungles of our country where we lived with people for more than 16 years of the resistance war. We need no advice from anybody Uganda, apart from our peers from the African continent.”

President Museveni has on several occasions accused the West of interfering in Uganda’s affairs of a sovereign country by trying to impose their views on Ugandans.