What President Museveni and Kagame have agreed to do 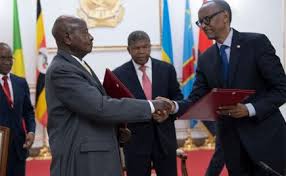 President Yoweri Museveni has said Uganda will do its part to ensure that the resolutions of the Third Quadripartite Summit held in Angola’s capital on Sunday are implemented.

In recent months, diplomatic ties between to the two neighboring East African nations have been far from warm. Through the summits, Angola and DR Congo have tried to reconcile to nations

According to the missive released after the latest meeting, Uganda and Rwanda “pledged to continue to prioritize the permanent dialogue between the two countries for the development and well-being of their peoples”.

The Luanda Summit decided the following:

•  The release of the national citizens of each country [Uganda and Rwanda] duly identified and included in the lists exchanged for this purpose.

•  Both parties must refrain from all factors that may create the perception of supporting, financing, training, and infiltration of destabilizing forces in their neighbor’s territory.

•  Both parties must continue to protect and respect the human rights of the national citizens of the other party.

•  The continuation of the activities of the adhoc commission, as a mechanism for monitoring the implementation of this process.

•  The next quadripartite summit will take place in Gatuna/Katuna in the common border between Rwanda and Uganda on February 21, 2020.