We cannot Wish Away our Past -Gen Tumwiine 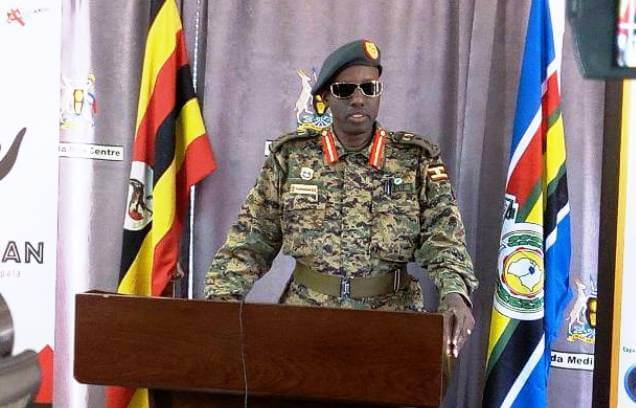 Security Minister and U.P.D.F. Representative in Parliament, General Elly Tumwiine was on Tuesday morning appearing before the Parliamentary Rules committee over accusations made by Hon Katusabe Atkins and Hon Cecilia Ogwal for remarks he allegedly made against the Speaker Hon Rebecca Kadaga in a private conversation.

The incident has raised questions over the conduct of Army MPs in Parliament, an argument that has been debated to exhaustion and the role of Bush war heroes in the politics of this country. Many claim that the alleged behavior of the Military men is a sign that they have lived beyond their sale by date and as such they ought to vacate the political sphere.

General Elly Tumwine is credited with firing the first shot during the launch of the Bush war in 1981 as part of the group that raided Kabamba barracks in Masindi. The appearance of the General before the committee has raised debate over the role that generation has to play in the current politics of this country.

Political detractors of the NRA revolution have long argued that the ‘bush war’ generation served their patriotic duty when they heeded to calls to liberate the country and as such the country owes them no favors whatsoever in regards to their role in the liberation struggle.

This argument is not only flawed but disrespectful of the thousands of men, women and children who not only sacrificed their lives but those of their families when they risked death and persecution to engage in the struggle to liberate the country and establish the foundations on which our current stable political environment was built on.

By continuously attempting to embarrass these individuals and also water down on their sacrifices to our liberation from tyrant governments, forgetful individuals with intention to be revisionists to our history with the aim of subverting the revolution in favor of their own political ambitions is not only regrettable but also a pathetic and deliberate ploy to discredit the entire values of the revolution and demean the political movement that inspired them to take action.

As the story goes, first they came for the slaves and I did nothing, then they came for my brethren and I realized none of us was safe.

The efforts by these agents of the counter revolution to bring down the movement by whatever means possible is clear and when we see respected elders of our nations being dragged in the streets naked, we are left with nothing but to fear what shall befall the institutions and values of our nation when we fail to act and nip them in the bud.