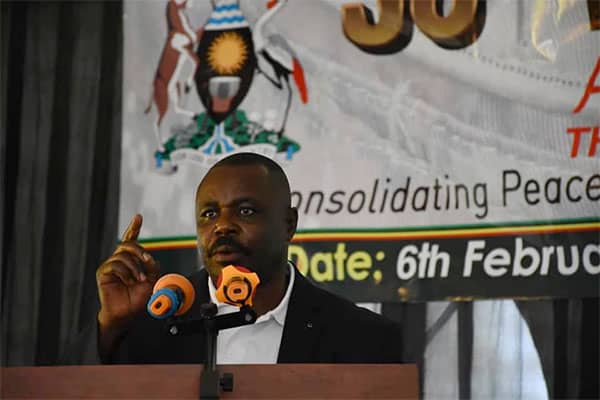 The current peace in Acholi sub-region signifies the great strides that the Uganda People’s Defence Forces (UPDF) has made in securing the country’s borders, deputy speaker of parliament Jacob Oulanyah has said.

Speaking at the launch of the 38th Tarehe Sita anniversary national celebrations at the army headquarters in Mbuya, Oulanyah said the achievements of the UPDF are visible to everyone and need to be celebrated because the national army’s image has transformed drastically over time.

“For the first 24 years after independence, Uganda had 9 presidents and 7 military coups. 33 years later, we have had one president and seven elections…Essentially we moved from coups to elections. That also means that we have moved from the bullets to ballots,” said Oulanyah.

For years, northern Uganda was ravaged by an LRA insurgency that plagued the region and destroyed vital infrastructure. Kitgum Municipality MP, Beatrice Anywar also thanked the UPDF for their tremendous effort in bringing peace back to the region to foster prosperity and development.

“I want to take this opportunity to welcome you, the UPDF to the north of this country. You are warmly welcome because we have a case to show.’’ Anywar said.

“The peace you are talking about, we are the ones enjoying it so you have rightly chosen northern Uganda and particularly Kitgum to host you for this Tarehe Sita .We are enjoying the infrastructure and for the first time we have received a tarmac road.” she added.

According to UPDF chief political commissar, Brig Henry Matsiko, the UPDF engineering brigade will carry out renovations for health facilities in Pader (Padibe HC III), Lamwo (Anywee HC III), Nwoya (Lanenober HC III) and Omoro (Koch Goma HC III). Matsiko said that the celebrations will be the climax to a week filled with activities leading up to the celebrations.

Matsiko also encouraged volunteers from technical institutes around the region to join in activities that also include construction of classroom blocks at Anywee primary school in Gulu and Omee primary schools in Amuru district among others.

The chief of defence forces Gen David Muhoozi said the UPDF is now a good brand that not only maintains stability within Uganda but is also able to export peace to other countries.