The Uganda National Examinations Board (UNEB) has rubbished fake news making rounds on social media that S4 candidates failed UCE exams this year, and that teachers have not been doing their due diligence.

This follows a fake tweet attached to the UNEB Executive Director Mr. Dan Odongo that claimed that the candidates had failed.

“I have never seen a year like these form four candidates have failed this year. I wish they repeat again. Teachers have not been teaching. No work done,” the fake tweet read. 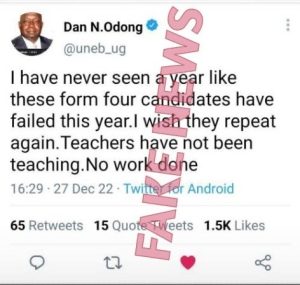 According to UNEB officials, Mr. Odongo whom the quote is attributed to, does not have a twitter handle.

“UNEB disassociates itself from fake news making rounds on social media to the effect that Form four candidates failed this year that teachers have not been teaching. Please disregard this unfounded and false news,” the statement read.

The board noted that marking of this year’s UCE exams is still under way and will be preceded by a number of quality assurance processes before the final outcome can be determined.

“The official results of the 2022 Exams will be announced at appropriate dates that will be communicated in due course,” UNEB added.

The public has been asked to remain calm as the Board finalizes the various processes before the release of results.