Ugandans have Since Moved on from Bobi Wine Hogwash 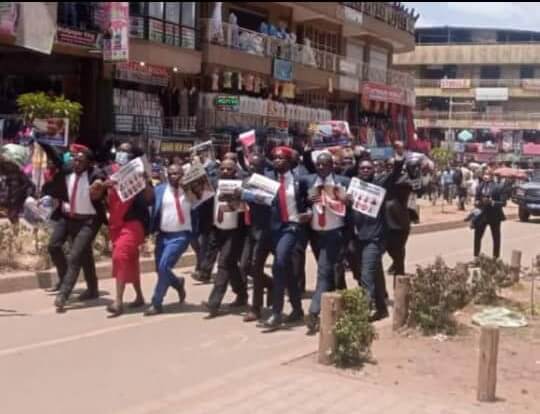 H.E Yoweri Kaguta Museveni last Sunday addressed the country on issues to do with COVID-19 and security concerns. He as well promised COVID-19 relief package to some of those Ugandans whose business is still under locked down, like bar business and others related.

As H.E Museveni was addressing the nation, Bobi Wine addressed a stage managed audience on social media and called upon Ugandans to leave whatever business they will be doing and hit the streets to demonstrate.

The following day he took to the streets in Kampala but to his shock, he found himself there alone, with a few of his cronies with whom he shares a meal card. Ugandans have already moved on to doing constructive work.  Oh, how he died in his own movie!

To save him from further embarrassment, the police officers walked with him and his insignificant group to CPS as business continued in the capital city center with normalcy.

Bobi Wine wanted to ascertain whether Ugandans are still interested in his scrappy political business and indeed, they proved to him that it is not him that feeds them.

Ugandan business men and women in the metropolitan city have already moved on with their day to day business and have shown they will deal with whoever tries to disrupt their work.

Bobi Wine is still earning from Parliament and other external forces that he gets funding from. He thinks his business is now to disrupt other peoples’ work. What a joke!