Transparency is critical if we are to defeat Ebola

Muhanga stated that while they had approached the Ministry of Finance to supply the money, the Health Ministry had yet to receive a response. She stated that the ministry was able to raise Shs 2.1 billion from its own funds to respond to the Ebola outbreak.

The same Wednesday afternoon, the US Mission to Uganda tweeted that they had allocated a total of Shs20.9b to Baylor Uganda, Shs14.4b to the Infectious Diseases Institute and Entebbe International Airport, and another Shs24.3b to various United Nations agencies.

The United States has said it is channelling its financial assistance to fight Ebola Virus Disease (EVD) through implementing partners rather than the Ugandan government because it does not want the money to end up in the ‘wrong pockets.’

“Corruption is a very serious challenge,” US Ambassador Natalie Brown said, citing past revelations by the Inspectorate of Government (IG).

According to Ambassador Brown, the money is to support Ebola surveillance and contact tracing, case management, follow-up care for Ebola survivors, diagnostics and laboratories, risk communications and community engagement, infection presentation and control, care and treatment of patients, and also safe and dignified burials.

The Minister of Health, Dr. Ruth Achieng, said that as a ministry, they prefer the donations to be given directly to the ministry and not in kind.

On Wednesday, Brown, said they had donated approximately Shs22.8 billion out of a total of Shs85 billion to the Ministry of Health to support official intervention against the disease, money that Dr Atwine said they had not seen.

A History of Mismanagement

During the COVID-19 pandemic, four employees from the office of the Prime Minister were arrested and charged for having been implicated in a procurement scandal of food items for vulnerable people under lockdown.

The Parliament of Uganda also probed the Uganda Development Bank over the criteria they used to give different companies and businesses funds meant for resilience and recovery during and after the COVID-19 pandemic.

The Parliament of Uganda was not spared of scandal as the President accused them of allocating 10 billion Uganda shillings to themselves as funds for sensitizing the public about COVID-19.

These and many more COVID-19-related scandals cast a lot of mistrust among the public, which looked at the pandemic as a money-making scheme for some top government officials. The mistrust led to many people abandoning SOPs, which in turn escalated the spread of the virus and caused many people to lose their lives.

For a deadly disease such as Ebola, as a country, we should see the Ministry of Health being trustworthy by declaring how much money has been donated, who has donated, and how the funds or donations are going to be used.

The Ministry of Health should work together with other health partners and key stakeholder groups in unison and not in isolation.

The Ministry of Health should provide accountability and updates to the general public on how the available funds have been spent, the successes and the challenges.

With the public trust,   it will be easy to follow and adhere to the set guidelines and SOPs, and this way Ebola will be contained and defeated.

Ugandans have defeated Ebola in the past. We can defeat it together this time only if there is trust and commitment from the public and all key stakeholders.

Ebola is here. Ebola is real! 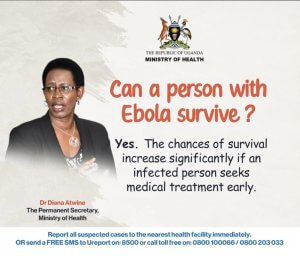