Seven people have been confirmed dead while thirty are severely injured in an accident that occurred the morning of December 30th 2022, along Ntungamo-Kabale Highway.

The incident follows a head-on collision between two buses. The accident involved Volcano bus reg. no. RAD CO 798B that was coming from Rwanda and Oxygen bus reg. no. KCU 054L from Kenya through Uganda to Kigali, according to Police.

According to preliminary Police findings, the accident occurred at 4am near Satellite Holiday Resort, two kilometers from Muhanga trading center while heading to Mbarara.

Police findings have attributed the accident to too much fog which affected the drivers’ visibility thus leading to the collision. 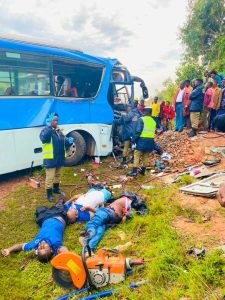 Police confirmed that the accident victims have been rushed to Rotom Health Centre located in Muhanga Town Council, while others were rushed to Kabale Regional Referral Hospital by Police patrol cars and Ambulances.

According to The Kigezi regional police commander SSP Ibrahim Saiga, Police are on the scene and more details will be shared later.

“Our officers are still compiling the details of both the dead and the injured. Among the dead are both the drivers of the ill-fated vehicles. We shall share details with you later,” he said.

Police reports indicate that 55 people lost their lives in 206 accidents registered across the country between December 23rd and 26th, 2022.