Sheema: Police Arrests One over Illegal Possession of UPDF Uniform and Ammunition

The territorial Police in Sheema District has arrested one suspected criminal in possession of Army attire, a hand gun, ammunition, and car number plates.

According to Police, Atuzarirwe was arrested on December 20, 2022 during a joint operation after various reports were made to Police in regards to his poor relations with the locals of Shuuku. 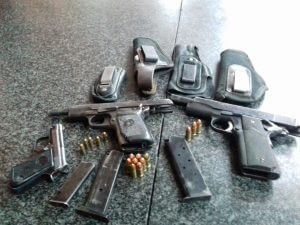 Police added that Atuzarirwe is currently in custody as further investigations continue.

The UPDF act prohibits any person from manufacturing, selling, wearing or using any uniform authorized for use by the Defence Forces without authority. The persons who violate the act risk an imprisonment term of up to 7 years, on conviction.

Under the UPDF Act, the possession of military paraphernalia without authority is a criminal offence and anyone found guilty faces a 10-year jail term.