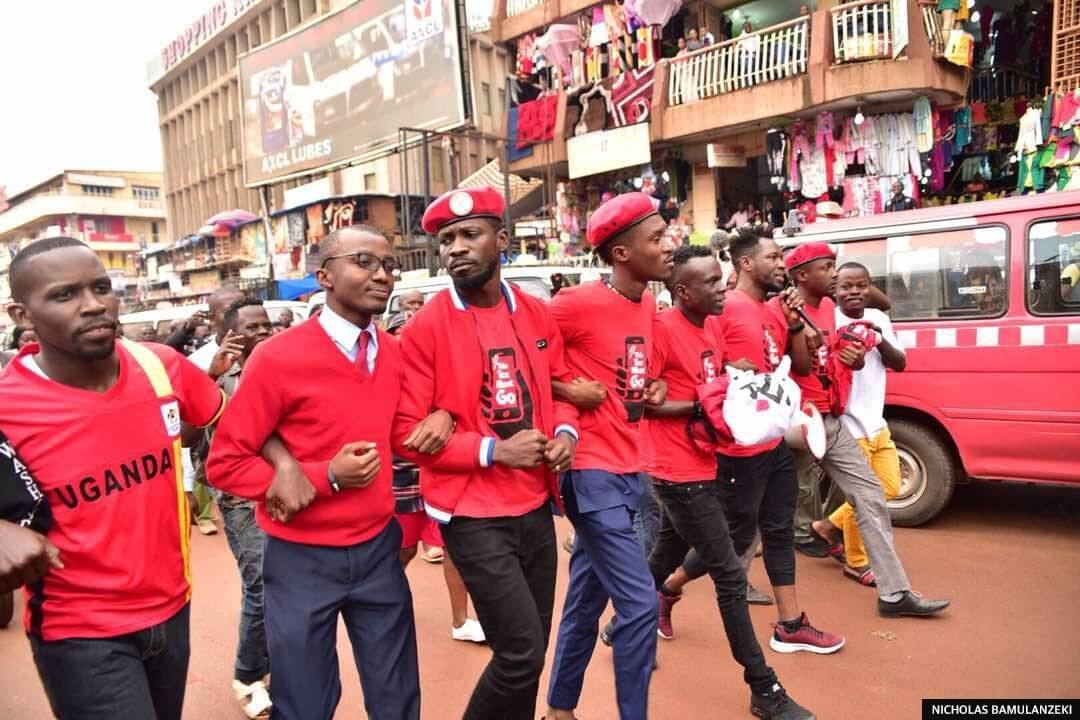 Government is investigating the link between a hi-brid terrorism group called the Red Movement and Robert Kyagulanyi’s People Power.

Security Minister General Elly Tumwine says the Red Movement is identified by red outfits, which they supply worldwide with intent to create anarchy worldwide. We should be reminded that when the people power group of Bobi Wine first surfaced, they were fighting for the rights of Gay people supported by the former French Ambassador and a coalition of Gay activists. They were also against the payment of taxes such as OTT, a form of economic espionage.

Security Minister General Elly Tumwine says the Red Movement is identified by red outfits, which they supply worldwide with intent to create anarchy worldwide. The UPDF only recently gazetted the red berets and they will thus forward be only put on by the military police as it should be.

According to the minister, In Uganda, you see it and they’re taking advantage of the very many young people. Because this group is vulnerable, they become an easy target.
All the red organizations you see in the world are connected. We’re trying to convince the People Power group not to take that direction.

Criminals and we’re slowly organizing to deal with them. UPDF is our greatest pride as a country. However, everything has a limit. In the enjoyments of your rights, don’t infringe on the rights of others.
We came from a place of political and institutional instability. The people of Uganda and the rest of the world are happier being in Uganda because we have the freedom to do whatever we want.

According to Charlse Bichachi speaking on Nbs Tv, “We need to see the substance of People Power, it has thrived on slogans and symbols but we don’t know the substance. It’s very difficult to speak for People Power. Gazetting the red beret is legitimate”.

According to journalist Sabiti Joseph, It is not possible to ban blue because it’s registered under a party. People Power, on the other hand, is everywhere, it can’t lay claim to any colour because they’re not registered.
I need someone to give me a deep ideological conviction in the People Power movement. I’ve seen a couple of demigods, in the government and some in the opposition.
It’s becoming increasingly difficult to know what is a legitimate motive and what is political in Uganda. In a normal country, gazetting is okay.

People fear being challenged but it’s good because you need to move forward. Uganda holds free and fair elections. However, it’s a continuous effort that needs checks.
Ugandans can say whatever they want, that’s the freedom I’m talking about.

Ugandans have gained confidence from the NRM. Before, people feared to identify themselves as Ugandans due to the bad regime, today, every Ugandan is proud of being Ugandan even when they’re opposed to the current government.

The 68 years colonists spent here were deliberate, even when we gained independence, they had changed our education system, culture and confidence.
Independence, as described by President Julius Nyerere, is the freedom to manage or mismanage your affairs. Freedom, confidence and democracy are the three words you should emphasize when talking about independence.

General Tumwine also cautioned the public to respect elders and institutions saying that, There are two types of people in this world, those who create what isn’t there, and this is what generals do. Generals create. The second type of people is those who follow the first category.

Anite A Liability to Herself and Government