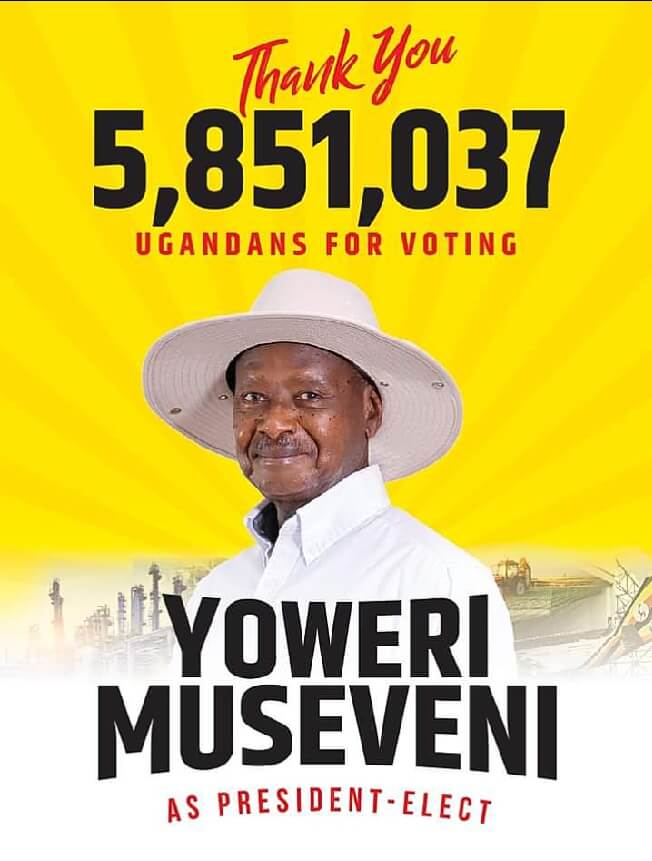 President Yoweri Museveni’s 6th inauguration on May 12, 2021, as a democratically elected leader, will consolidate his legacy as a cautious, pragmatic and systematic leader, NRM revolution and the enduring mission to build a stable, democratic, and prosperous country.
Hopefully, election losers have absorbed their grief, and the inauguration will help reduce political rancor they have been engaged in.
Over the last thirty-five years Uganda has witnessed tremendous and positive metamorphosis from a failed state to a vibrant respected nation making its fair share of contribution to the world.

As this year’s theme goes “Securing the future,” together, we must always remember to put our country first before anything else so that as citizens we shape our country’s destiny in the most desirable direction for inclusive growth, prosperity, security, enjoyment and harmony. This should not only be done by the elected leaders, but by every able citizen, young and old.

The rise from ashes to a land of great promise has been due to the hard and selfless sacrifices by Ugandans and especially the men and women in our armed forces who have returned peace, security and stability that enabled rehabilitation, recovery, development, and now, the ongoing drive to prosperity and modernity. Uganda is reaching an economic take off stage.

But there still remains a huge drawback because many people are still trapped in subsistence mode of production with no adequate or sustainable incomes for their immediate families. It is, therefore, critical that leaders at all levels both in public and private sector focus, and make the uplifting these Ugandans out of poverty into massive socio-economic transformation our collective priority.

Each swearing-in ceremony marks the beginning of a new political phase, affirmation of the trust Ugandans place in President Museveni and NRM leadership, and tribute to our collective efforts to build a durable democratic dispensation and secure the future on which prosperity rests. The impressive socio-economic transformation being witnessed continues to awaken and trigger Ugandans to meaningfully participate in wealth and job-creation initiatives. More Ugandans are embracing the urgent need to integrate into the modern money economy and making positive transition from poor and subsistence living to prosperity and modernity.

Through combinations of stability, discipline and policy measures, Uganda’s economy is on an upward trend through a private-sector led development. We must therefore continue to nurture more private sector initiatives to consolidate and expand the gains already made while building the resilience needed to create goods, services, and more opportunities especially for the rising young population.

There have been improvements in the health sector by emphasizing immunization, hygiene, nutrition, behavioral change, and malaria control that contributed to the elimination of more than 80% of the sicknesses. Sicknesses like Hepatitis-B, Hepatitis-E, AIDS/HIV, among others are preventable by behavior change, immunization or hygiene. Health facilities both government and private have increased as follows. Today, there are 181 hospitals from 156 in 2015, 222 Health Centre IVs from 193 in 2015, 1,510 Health Centre IIIs from 1,383 in 2015, 3,364 Health Centre IIs from 2,790, and 1,578 private clinics countrywide.

Under President Museveni’s leadership, Uganda has significantly contributed to regional peace, security and stability. Even at its nascent stage, NRM and Uganda supported African National Congress (ANC) of South Africa by hosting its fighters (Umkonto We Sizwe) and training them in Kaweweta, present day Nakaseke for the liberation from apartheid. Uganda, almost singled-handedly supported, armed and contributed to the liberation, stopping genocide, restoration of peace and resettlement of refugees in Rwanda.

Uganda is today safe haven to 1.4m refugees from across the region and beyond because unlike the days past when her own people filled refugee camps in the region, its policy and environment are predictable, stable and conducive. The Uganda People’s Defense Force has played vital and positive roles in Democratic Republic of Congo, South Sudan, Somalia, Sierra Leone, Liberia and Central African Republic.

During the 2016-2021 term, which President Museveni named “Kisanja Hakuna Mchezo”, NRM honored and fulfilled most of its election manifesto pledges to Ugandans by delivering on the flagship projects like the Jinja Bridge, Uganda Airlines, power projects, many roads and continuous peace, security and stability among others. The continuous revamping and construction of critical infrastructure is progressively reducing investment, trade and business bottlenecks in Uganda which should bolster attraction of more investments and tourism to increase GDP.

NRM’s good leadership has delivered education to secure the future since educated and healthy population is critical to generating wealth and improving living standards. NRM pioneered Universal Primary, and Secondary Education (UPE and USE) programs respectively, which have brought tremendous and steady rise in school enrolment at all levels, and for the girl child.

While there are sharp political contestations driven mostly by mendacious behaviour by the opponents of NRM, overall, Uganda is on the right trajectory.

Through our collective efforts, the democracy rating is rising and maturing while people’s individual freedoms are getting more entrenched and safe.

Share
Facebook
Twitter
WhatsApp
Previous articleLeader of Lango urges Youth not to engage in street Demonstrations
Next articleYOU GIVE ME LECTURES ABOUT DEMOCRACY, WHAT ARE YOUR CREDENTIALS? PRESIDENT MUSEVENI BLASTS FOREIGN ACTORS