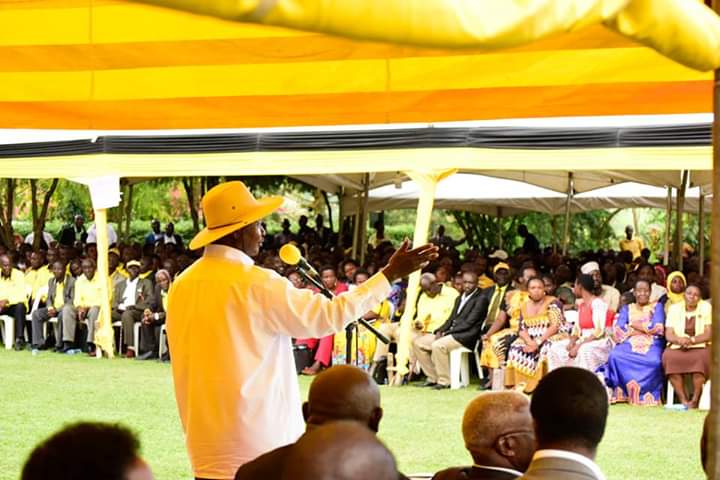 President Museveni has urged leaders from Tooro sub region to guide their people in identifying opportunities that will enable them create wealth and alleviate poverty.

The President who on Thursday met with over 1,000 district local leaders and government officials at Kalya Courts in Fort Portal Municipality in Kabarole District, discussed various mechanisms of ensuring service delivery gets to the grassroot people, finding solutions to land fragmentation and general ways through which poverty can be eradicated from the region.

He said, “I urge you leaders to keep mobilizing, and educating our people on this subject of wealth creation.”

He said empowering homesteads that constitute 63% in subsistence farming is now the Government’s priority and that transforming them into the money economy is very key.

“We must appreciate where the opportunities lie. They are in commercial agriculture, industries, services and ICT. Leaders must guide the people in this direction, helping them identify which sector to play in,” Museveni told the mammoth gathering.

He re echoed the need to adopt the four-acre model of agriculture where each household must own an acre for fruits, another for food crops, one for animals, and also pastures.

He advised that those with less than four acres could largely focus on animal husbandry and projects like poultry rearing.

He advised cattle keepers to do it on zero-grazing basis to use the land maximally, where as those with big chunks of land can engage in growing cash crops like tobacco, cotton, sugarcane, tea and others.

President Museveni also told his mammoth audience that Government has prioritized industrialization and ICT and is doing everything to make the business environment very conducive.

“We have invested in security, infrastructure, and now working towards making credit cheaper, he promised.”

He gave them hope that Government will mobilise resources to implement the mentioned wealth creation programmes to supplement Operation Wealth Creation, youth and women funds which are already empowering grassroot communities.

“We shall lobby Parliament to increase allocations to these funds,” he optimistically said.

He told them to exploit Tooro region’s great tourism potential and bid goodbye to poverty.