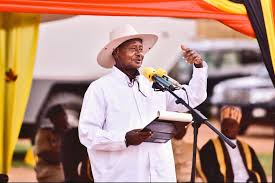 President Yoweri Museveni has now proceeded with his wealth creation sensitization campaign to the central region, having been to almost all the sub regions in the country.

The well-laid out programme will cover Kampala and neighboring districts starting Tuesday July 16, 2019. On Tuesday at 11 O’clock, the President will meet with leaders if Greater Mukono, Luwero and Mpigi districts. On Wednesday July 17, 2019 at 12 O’clock, he will address a rally at Ngoma Sub County in Nakaseke District.

On Thursday July 18, at 1.00 PM, President Museveni will meet regional leaders of Kampala and Wakiso Districts after which He will do a radio programme in Kampala at 7.00PM.

On Friday July 9, he will commission new road development projects (26kms roads and 14 junctions) in Kampala at 11 AM, then conclude by addressing a rally at Namayumba Sub County in Wakiso District.

The President has already covered Tooro, Bunyoro, West Nile, Northern Uganda, Karamoja,  Bugisu and Busoga sub  regions where the wealth creation gospel has been massively received. He is yet to cover a few more sub regions including Ankole before he concludes his countrywide tour.

Explorer News is committed to following and updating the President’s wealth creation tours countrywide up to the conclusive end.