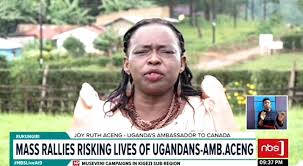 Uganda’s ambassador to Canada Joy Ruth Acheng has said that President Yoweri Museveni is the best leader for Uganda in this uncertain time and deserves to be re-elected.

Acheng said that Uganda, like much of the world, is in the throes of dealing with the instability caused by the novel Coronavirus outbreak. She said that ever since COVID-19 brought normal life to a halt, Uganda has been among the least affected countries because of President Museveni’s leadership.

Acheng pointed out that though Uganda is considered a third world country, Museveni has been able to steer the country to respond effectively to the COVID-19 outbreak. As a result, while other countries have recorded hundreds of thousands dead due to COVID-19, Uganda’s toll currently stands at 245 dead.

She said that despite the lockdown that was effected in March 2020, Ugandans have continued to be able to earn a livelihood because of the cautious reopening of vital sectors.

Acheng says Uganda is at a pivotal moment that requires a true and tested leader. She believes Museveni is that leader as many Ugandans have demonstrated with their vote for him time and again.