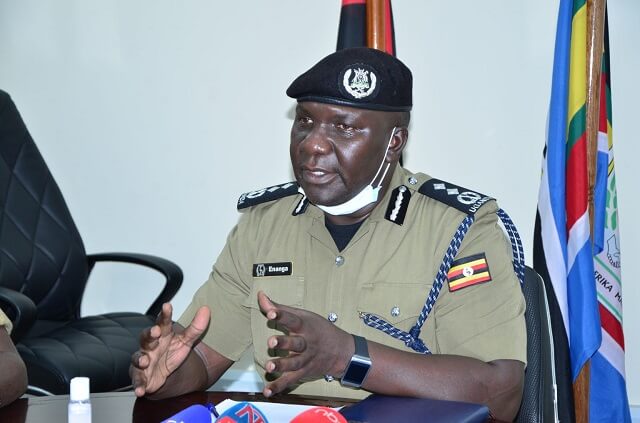 Police has said they shall continue pulling down campaign posters of candidates in the city if they are placed in the wrong places.

A number of posters of presidential and parliamentary aspirants were pulled down recently by police on claims that they were blocking visibility in the city.

Speaking to the media during news conference in Kampala, the police spokesperson, Fred Enanga, said they will work together with city councils and municipalities to remove all campaign posters in non gazetted areas.

“Some time back we came out and informed the candidates that once you are nominated, it is important to harmonise the placement of your posters with city council authorities so that they can get correct placement for your posters,” Enanga said.

Enanga also said the items that were confiscated during security raid on the offices of the National Unity Platform early this week did not contain any money or even signatures of people endorsing Robert Kyagulanyi for the presidency.

He said the operation mounted by a joint security team was aimed at retrieving military and police wear from the NUP offices adding that during the operation, police also confiscated some branded materials.

Enanga said the accusations levelled against them that they had confiscated money amounting to Shs 23 million and Kyagulanyi’s nomination forms are baseless.

He said the record shows that the items that were picked from the offices included 67 green berets, 233 red berets, 178 badges, 6 rolls of belts, 11 pairs of navy blue warm suits, 102 red overalls, and some written materials detailing plans of attacking security personnel during the electoral process.