ON THE RUN: Kavuma Linked to Armed Criminal Gangs around the Kampala Metropolitan Area

Kavuma Jamushid a member of Bobi Wine’s personal security team has been linked to different armed criminal gangs targeting security installations and the business community around the Kampala Metropolitan area.

On November 8th 2022, police carried out an intelligence led operation around Namungoona, Masanafu areas and arrested 11 suspected armed robbers with a toy gun and Knives. The suspects were found at a local drinking point that they were using as a meeting place to coordinate their activities.

According to police reports, the gangs’ front-man Ntwatwa Muzafaru confessed to the crimes and ousted Kavuma Jamushid a member of Bobi Wine’s security as the gangs’ overall leader and mobilizer.

It is alleged that Kavuma who escaped arrest is on the run and on the police’s list of the most wanted criminals.

“We are looking for a one Kavuma Jamushid who recently escaped arrest from the operation that was conducted around Namungoona. He has connections with the suspected armed criminals arrested recently by our joint security teams,” police said. 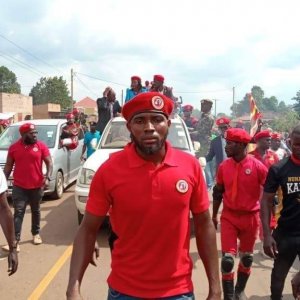 However, NUP leaders including Bobi Wine have since picked up a different narrative on various social media platforms claiming Kavuma was abducted from Masanafu by security forces. The statements are contradicting with some claiming he was shot and badly injured and others saying he was just abducted.

“I don’t know what’s happening to our brother Kavuma Jamushid right now ever since he was abducted 8 days ago…,” Bobi Wine tweeted.

The operation and arrests of the suspected armed criminals follows various syndicated attacks on the different security installations especially in the central region. They target police personnel on duty stations whom they kill and rob of guns.