Kikonyogo while addressing the media on Monday December 5th 2022 at the party Headquarters in Najjanankumbi, has challenged fellow opposition politicians who have made it a habit to use political intolerance, hate speech and sectarianism as their political capital to desist from the habit since it threatens National Security.

“I call upon all political actors and activists across the country, mostly those from the opposition to refrain from this behavior of using sectarianism for political gain. As FDC, we can’t support such barbaric behavior and intolerance from our fellow members of the opposition because Uganda is our only country,” Kikonyogo said.

Kikonyogo cited the conduct of the different NUP supporters including the party leaders who have made it their daily responsibility to spread the negative image about Uganda. He said they are doing it out of ignorance forgetting that Uganda is their only home. 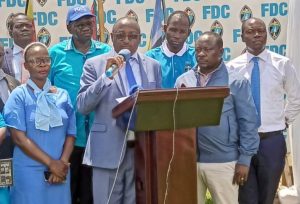 His comments follow a series of what has been termed as sectarian messages perpetrated through different media channels especially by opposition leaning politicians. It is alleged that most of the perpetrators are being facilitated by politicians to achieve their political agendas.

Since the perpetrators escape unpunished, Parliament has amended the law regulating the use of Computers in order to help check on the spread of hate speech in the media.

Security agencies last week arrested and charged the former Presidential aspirant Joseph Kabuleta on grounds of promoting sectarianism in the Country and has since been remanded to Luzira prison for further investigations.