President Yoweri K Museveni while speaking at Mpondwe Border yesterday 21st December, directed border officials to waive payment of Visa fees by DRC citizens entering Uganda arguing that citizens from the East African Community should have free entry and exit between the countries with in the union.

The President made these remarks during the commissioning of the first phase of the Mpondwe-Lhubiriha Border Export Market and Mpondwe, a ‘One Stop’ Border Post in Kasese district which had the attendance of several government officials, URA, Ministers and officials from the DRC government.

“Crossing in East Africa should be cost free. You pay visa when going to America or Europe, but a visa to DRC!  That is rubbish. If that is the case, I have removed it,” President Museveni said.

The president made this directive after several complaints from the border residents represented by their LC5 Chairman, Mr. Muhindi Bukombi Eliphaz who claimed that a fee of Ugx10,000 is required when crossing the border. He further added that such charges have strained smooth flow of trade especially the fish industry between the two countries. 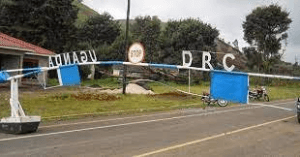 “For purposes of promoting modern trade and in the spirit of the East African community, we request that you liaise with your counterpart the president of the DRC Tshisekedi to allow Ugandans free entry in order to facilitate business,” said Muhindi.

According to the Permanent Secretary Ministry of Trade and Industry Ms. Geraldine Ssali, the market and the one stop border post will see an increase in regional market exports especially industrial and agricultural products in the years to come.

Following its commissioning, Mpondwe becomes the eighth ‘One stop’ border post after Malaba, Mutukula, Lwakhakha, Elegu, Katuna, Mirama Hills and Ntoroko only waiting to be commissioned.