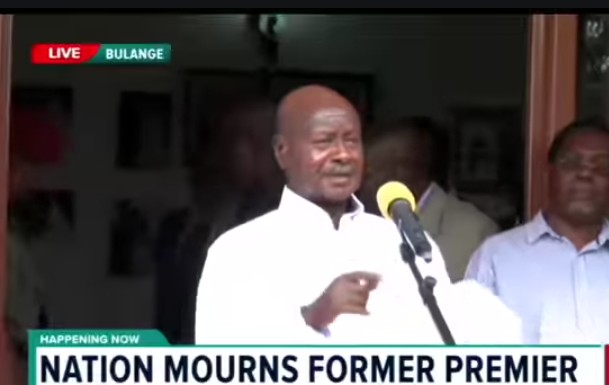 Tributes for Prof Apolo Nsibambi continue to come in from across the country. Nsibambi passed on ‘peacefully’ at his home in Bulange, Mengo Tuesday evening, according to his wife Esther. He succumbed to Luekemia.

President Yoweri Museveni is the chief mourner of the man who was his longest serving Prime Minister for 12 years, from 1999 to 2011.

Addressing mourners at Nsibambi’s home in Bulange on Wednesday, President Museveni commended him for streamlining salary issues at Makerere University, bonding Buganda and bush warriors and bridging the gap between war veterans and the Academia. 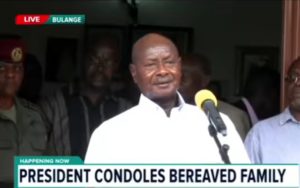 The President had earlier on Tuesday taken to his social media handles to condole with Prof Nsibambi’s family. More tributes from across the political divide and far kept ushering in.

“I have, with a heavy heart, learnt of the untimely passing of the former Prime Minister, Prof Apolo Nsibambi. He was a true patriot and great academic. The country will miss him. I have instructed Prime Minister Ruhakana Rugunda to lead a team that will ensure we give Prof Nsibambi a befitting send-off. May his soul rest in peace.”

“I am saddened by the passing of our former Prime Minister Prof. Apollo Nsibambi. Prof. Nsibambi was a revered academic, who for people from my generation was almost legendary. We loved his colourful oratory and used his words e.g. ‘Lugubrious’ as often as we could. Rest in Peace.”

“I am deeply saddened to hear of the passing of Professor Apollo Nsibambi. We pray that God strengthens the family as they go through this undoubtedly difficult time.”

“I’m saddened to learn of the death of former Prime Minister Prof. Apollo Nsibambi. I convey my condolences to his family and also to all Ugandans. An accomplished academic who transitioned smoothly into the political arena, Nsibambi served with integrity, dignity and class. RIP”

“I am deeply saddened by the passing on of our former Prime Minister and intellectual guru, Prof. Apollo Nsibambi. His sense of humor and contribution to the development of Uganda will never be forgotten. May his soul Rest in eternal peace. May the good Lord comfort his family.”

“The Parliamentary Commission has learnt with sorrow of the passing of former Prime Minister & Leader of Government Business, Prof Apollo Nsibambi. Our condolences to the family, relatives & the country at large on this great loss of a powerful servant of the nation. #RIPNsibambi”

Abed Bwanika, Peoples Development Party President
“Your integrity and leadership style will always remain with your name. Salutation from a nation you loved and served with distinction. RIP Prof. Nsibambi”

Uganda Media Centre
“Former Premier Professor Apolo Robins Nsibambi has left a deep imprint in Uganda’s political history, an unwavering love and commitment in the service of his country. He will surely be missed #RIPNsibambi”