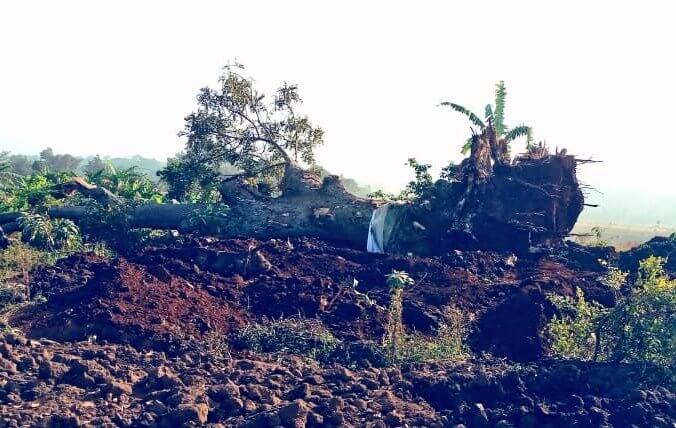 Gen. Katumba Wamala, Minister of Works and Transport yesterday afternoon told parliament that the construction of the Busega-Mpigi expressway had been delayed by a caretaker of a spiritual tree who wanted shs 500m compensation from Uganda National Roads Authority (UNRA) for his purported cultural site.

The Nabukalu tree at Mabuye was seated on a cultural site for the Lugave clan, where people who subscribe to Lugave clan, visit every month end for blessings from ancestral spirits.

The construction of key infrastructures has always been frustrated by such myths that surround the spirituality of places where development is projected to take place.

The tree caretaker a one Katamba Hussein is said to have spiritual powers to heal all kinds of sickness and handle people’s problems. Katamba even threatened that the spirits would cause havoc in case they are not appeased with their compensation request.

In the late 2000s, government had proposed to construct the Bujagali dam with a tunnel passing exactly where the said Bujagali spirits are located.

The late Mzee Nabamba Budhagali, the then spiritual leader of Busoga clans went ahead and threatened that a calamity would befall the nation if the dam was constructed before he personally relocated the spirits.

He was not paid and nothing happened, development took place and tourism was boosted in the area which contributes millions of dollars per year in revenue to the government.

The same myths go on with the Busaabala spirit, Nyamwamba, and other areas where development had been delayed but as of now people enjoy its benefits.

These so called spirits in this tree located in Mabuye Mpigi district had stalled the construction process of the road that would be used by millions of Ugandans just because of one member of the clan who chose to run to court.

Some opposition members of parliament had gone ahead to jump on the issue against the construction to gain popularity.

While all this happened, the caretakers of this evil tree have no evidence to show how long the so called cultural site which also has the said tree has been in existence.

Whereas we must take cognizant of the fact that cultures and diverse ethnicities need to be protected, it is also clear that Katamba wanted to delay development and reap from what he didn’t sow.