The State Minister for Finance, Henry Musasizi has assured Ugandans of the safety of their savings with the National Social Security Fund (NSSF).

The assurance followed recent allegations of corruption and mismanagement of the populous’ savings whose portfolio stands at UGX Shs 17.9 trillion.

Musasizi revealed the development while appearing before the Parliamentary Committee on Finance alongside the Minister for Gender Labour and Social Development, Betty Amongi and, the NSSF acting Managing Director, Patrick Ayota on Tuesday 17th January 2023.

“The members’ savings are safe, internal controls are very robust, everything is working well,” Musasizi assured.

His response came as a relief to concerned members while affirming trust towards responsible management practices by the Fund.

Hon. Keefa Kiwanuka the Committee Chairperson expressed concern on the safety of the Fund that the Acting Managing Director presented a statement indicating that investments were in fixed assets which can be traded.

“There is a need to penetrate the informal sector to widen social security coverage,”  Ayota said before the Parliamentary Committee on Finance. 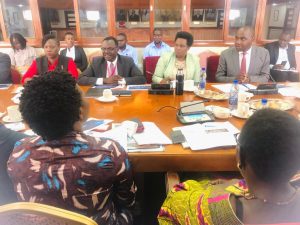 He added that NSSF was performing extremely well and making profits.

NSSF is a provident Fund that covers all employees in the private sector including Non-Government Organizations’ that are not covered by the government’s pension scheme.