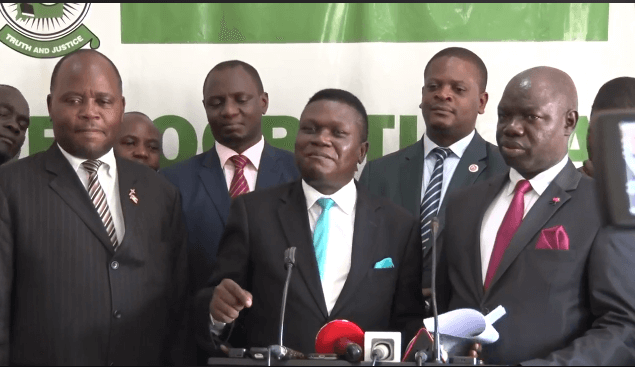 Newly elected President of the Democratic Party, Nobert Mao has cried out over the failure for Uganda’s opposition parties to unite and forma coalition to front single candidates during the forthcoming general elections. Mao also regretted that a number of his own party members had defected to the newly formed NUP party of Robert Kyagulanyi seeking for it’s party tickets.

The opposition has historically failed to front single candidates during previous elections and this is one of the reasons as to why many believe that the NRM has remained dominant throughout the country. In the few areas where they have agreed to front a single candidate, they have performed significantly better.

Yesterday, Latif Sebagala withdrew his candidature from the Kampala City mayoral race saying that he was doing it for the good of the opposition which was risking dividing up its votes and leaving room for the NRM to finally take the coveted seat.

However, such mature thinking and forward planning is very rare in the opposition today. For example, the leadership of NUP should have had this stand before the endorsed him for the ticket something that would make them extend an olive branch to the other opposition parties.

Others have even gone ahead to blame President Yoweri Museveni of disorganizing and dividing the opposition by constantly fishing from their pool and taking their best candidates but thats no excuse as its part of multi-party politics. Museveni is the chairman of the NRM and as such his primary concern is keeping his party in power. All other roles in that regard become secondary.

Mao however should also be doing more than cry tears as he is in position to advocate for the creation of a joint force. He is also to blame for dividing up the DP and losing it’s members to rival parties at such a crucial time. If individual parties cannot hold any form of cohesion how do they expect the different parties to come together at a time when it is survival for the fittest.

Share
Facebook
Twitter
Pinterest
WhatsApp
Previous article
Ugandans Have Had Enough of Violence – Peace Needs to Prevail Ahead of Elections.
Next article
Agriculture And Other Productive Activities Can Rescue The Youths From Poverty, Not Politics