The Law Development Centre (LDC) has dismissed its Academic Registrar, Mr. Everest Turyahikayo after finding him guilty of gross misconduct on grounds of unprofessional and unethical conduct.

Mr. Turyahikayo who has been Academic Registrar of Uganda’s sole Bar course teaching Institution (LDC) for eight (8) years was interdicted over sexual harassment of students in November.

According to a statement dated 20th December 2022, Lukyamuzi Hamis Ddungu the Institution Secretary revealed the decision following the meeting by the Management Committee considering a report of the Appointment Sub-Committee in respect of various disciplinary proceedings.

“Dr. Everest Turyahikayo, Academic Registrar, is found guilty of gross misconduct as provided for under Order 8.1.3 of the LDC Standing Orders, 2017, on grounds of unprofessional and unethical conduct unbecoming of an Academic Registrar,” a statement by LDC secretary read.

The statement added that Dr. Turyahikayo is accordingly dismissed with immediate effect from the service of LDC pursuant to Order 8.2.4 (e) of the LDC Standing Orders, 2017.

Lukyamuzi also revealed that Ms. Mary Nakigozi the Assistant Academic Registrar was found guilty over gross misconduct on grounds of failure to professionally and ethically discharge the responsibilities and high standards required of her office in management and processing of examination results.

“Ms. Mary Nakigozi is accordingly dismissed with immediate effect from the service of LDC pursuant to Order 8.2.4 (e) of the LDC Standing Orders,” the statement read. 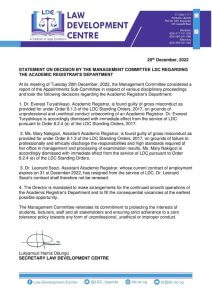 Sources indicate that Nakigozi in November was indicted for soliciting money from law students to help them pass examinations.

A number of students from the LDC have for long complained of mismanagement of their examinations and results that had increased cases of illegalities in the institution.

“Another Institution I have been accused of witch-hunting when I and colleagues last year highlighted the corruption, the mismanagement of students results, harassment, the truth always comes to light,”  Agatha Atuhaire, a former student at the institution, celebrated on hearing the news.

Lukyamuzi assured the students of the management’s commitment to protecting their interests, lecturers, staff and all stakeholders, and ensuring strict adherence to a zero tolerance policy towards any form of unprofessional, unethical or improper conduct.