The Minister of Lands, Housing and Urban Development, Hon. Judith Nabakooba, has issued a directive to landlords barring them from any form of evictions until the end of this festive season.

The minister made this communication this morning 23rd December 2022, through her official twitter handle.

“Urgent! No eviction orders during Holiday season,” stated the Minister.

Nabakooba revealed in her communication that all Resident District Commissioners (RDCs) and District Security Committees have been informed that all eviction orders are halted between 23rd Dec 2022, and 6th Jan 2023. 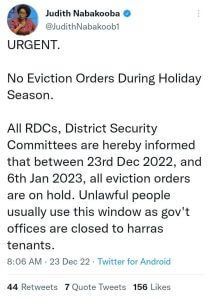 “All RDCs, District Security Committees are hereby informed that between 23rd December, 2022 and 6th January 2023, all eviction orders are on hold,” said Nabakooba.

According to Hon. Nabakooba, this directive is intended to stop people who usually take advantage of the festive season to unlawfully evict people since most government offices are closed.

“Unlawful people usually use this window as government offices are closed to harass tenants,” said the Minister.

According to the Minister, the directive is to take immediate effect and those who don’t abide will face the law.