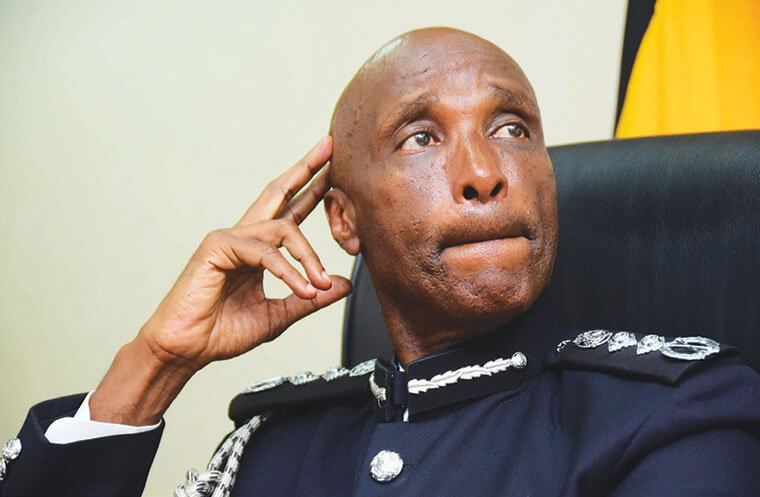 Former Inspector General Of Police (IGP) Kale Kayihura, alumni of the Air University International Officer School in Alabama was last Friday publicly designated by the US Secretary of State and the US Treasury department rendering Kayihura ineligible to travel to the US or conduct financial transactions through the American banking system.

Washington alleges that it has “credible evidence” that Gen. Kayihura while IGP of the Uganda Police Force (UPF) from 2005 to 2018 was involved in torture and cruel inhuman treatment of suspects held captive at the Nalufenya Special Detention Center through his command responsibility of the Flying Squad Unit,an elite specialized unit of the UPF that directly reported to Gen. Kayihura.

The US government under the Global Magnitsky Act, sanctioned Kayihura for his role in what it described as gross human rights abuses and corruption. The bill which applies globally,authorizes the US government to sanction those who it sees as human rights offenders, freezing their assets and banning them from entering the US. Kayihura joins an infamous list that includes Lt. Gen. Anslem Nhamo Sanyutwe, the former commander of Zimbabwe National Army’s Presidential Guard Brigade.

The Executive Order also publicly designated Kayihura’s wife Angela Gabuta, daughter Tesi Uwambaba, and son Kale Rudahigwa. The Sanctions violated the principles of natural justice that afford a person the opportunity to be heard. Kayihura was denied the basic human right of due process and fair hearing. The United States that prides it’s history in the principles of justice retailing itself as the global standard for the rule of law, but punished Kayihura and his family in absentia and unheard.

The statements issued by the US secretary of state and the US Treasury department were defamatory in texture characterized by disparaging remarks against the person of General Kale Kayihura for his service in capacity as the IGP of the UPF representing the humble government of the republic of Uganda. The Sanctions were nonsensical without investigations and concrete evidence aiming at undermining Ugandan State institutions. The Sanctions represent the highest level of hypocrisy of the US under the Trump administration. The judgment was passed basing on propaganda and deceit rather than proof and fact with the motive of exciting elements of the opposition in Uganda.

The United States foreign policy emphasizes strategic interests with no permanent friends nor permanent enemies, but only strategic interests. Kayihura worked closely with America’s Federal Bureau of Investigation (FBI) between 2005 and 2018 in his capacity as IGP of the UPF. According to Gen. Kayihura;

“The fact is that the FBI worked closely with me and units of the police that were involved in fighting crime including the Flying Squad. They were not scandalized by my leadership, but actually gave me an award for my contribution in the fight against terror. There is no high profile case in which our units did not liase with the FBI.They participated in for example, the investigations into assassinations of late Joan Kagezi and the late Andrew Felix Kaweesi,as well as the 2010 terror case. The treasury would thus do well to sanction these officers also.”

The attempts by Washington to discredit a former IGP of the UPF represents the highest form of disrespect of a sovereign independent nation state. The aim is to discredit state institutions. Uganda is a stable country with self correcting mechanisms demonstrated by the reforms in the leadership of the UPF healing the wounds inflicted by the accident of Kayihura. Government has already begun proceedings in court against Gen. Kayihura and several senior police officers.

The Nalufenya Special Detention Center has been closed and the Flying Squad disbanded. Militias such as the Boda Boda 2010 have been criminalized with its leaders in prison.