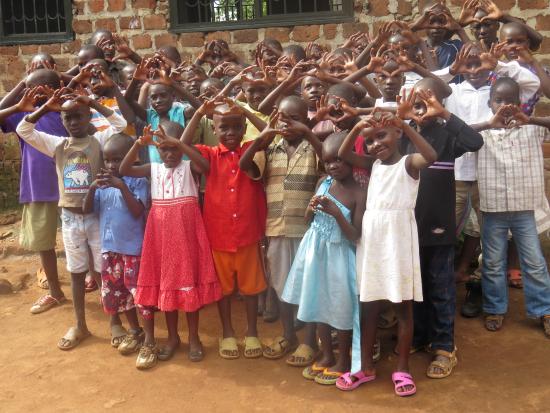 Several parents have decried how their hard earned money is being fleeced by a sham mobile NGO called Youths Vulnerable Children and Orphans (YVCO) through a syndicate network.

The owners of the briefcase organization disguise to offer the children free education
Parents who spoke to Explorer Newz over the weekend said the masterminds of the fraudulent organization include Evangelist Aaron Siribaleka who uses his network of coordinators like Hajji Ssejengo of Kawempe and John Kyagulanyi from Bweyogerere.

Another parent who freely talked to this news website, a one Charles Mulindwa of Bulenga, Bigasa Sub County in Bukomansimbi says the organization has offices in Bwaise Kawempe and that it has robbed millions of shillings from many unsuspecting parents from Mukono, Luwero, Lwengo, Mityana and Bweyogerere in Kampala District.

“In fact, suspicion in parents arose considering the time frame of the promised grant, later some parents were issued with fake bank slips showing payments that were later denied by the schools,” said Mulindwa .

“The con scheme leaders convince parents that their donors from Canada, USA, and UK had promised to offer half bursary scholarships to their children right from Nursery to University, provide them with capital and build for them houses,” recalls one parent who also preferred anonymity.

The parent recounts that in order for one to receive the benefits, they were told to pay half of the school fees demanded by the school as membership fee, 90,000/= for their registration, 4 passport photos for both parent and a child, 30,000/= for the birth certificate made by YVCO itself.

Most parents had more than one child since their bursary maximum is alleged to be four children per house hold, which implies that some parents lost double or quarter of the amount.

Sources from Police intimated that Evangelist Aaron Siribaleka is a former convict after having spent at least a year in jail over fraud. In 2007, he formed an organization called War Raid in Uganda, which robbed over 375M from the public.

He again launched the African Credit Programme which name later changed to African Christians in Development where he fleeced unsuspecting victims.

Efforts to get Evangelist Aaron Siribaleka’s side of the story were futile as he refused to pick up any of our phone calls to his known phone numbers.