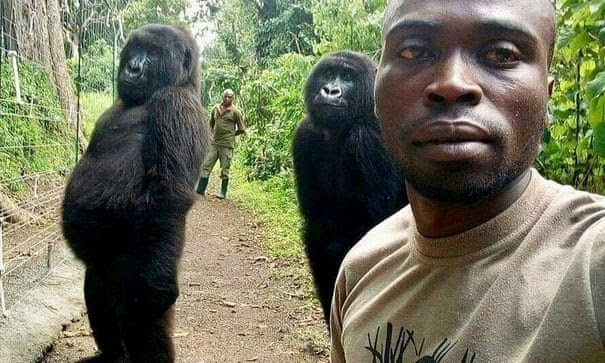 The media earlier this week was awash with a rare selfie that got tongues wagging worldwide. The unique selfie was none other than that captured by a one Mathieu Shamavu, a ranger at Virunga National Park in eastern Democratic Republic of Congo.

In the selfie are two gorillas, copying Shamavu’s movements. They stand behind him, one at the side, with her shoulders back and head up. The other seems to pose rightly so as not to miss the shot. The two are female orphaned gorillas.

Shamavu intimated to us that he was checking his phone when he noticed two female gorillas, Ndakazi and Ndeze, mimicking his movements behind him. He then decided to take a photo with them.

The photograph went viral especially on social media, attracting an insane number of likes and shares, moments after Shamavu posted it.

According to Shamavu, Ndakazi and Ndeze were the first orphaned gorillas to be cared for at the Senkwekwe Mountain Gorilla Orphanage Center. The orphanage center is the only place in the world dedicated to the care of orphaned mountain gorillas.

Ndakazi and Ndeze were orphaned 12 years ago when their families were killed by poachers.

Shamavu explains that the gorillas learn to imitate humans because they have very close contact with rangers and caretakers from a young age.

“In terms of behaviour, they like to mimic everything that is happening, everything we do,” Shamavu elaborates.

He said the caretakers at the orphanage try to give the animals as much access as possible to their natural environment. They exhibit “almost the same behaviour as humans.”

Shamavu says the orphaned gorillas need constant care, so the rangers live nearby to feed, play with them and keep them company.

Andre Bauma, also a gorilla caretaker, says the orphaned gorillas know they are family with their caretakers.
“We are their mums. They are a member of the family. We are their friends,” he adds.

Just like Bwindi Impenetrable National Park in Western Uganda, Virunga is one of the vast homes of wild mountain gorillas.

Bwindi Impenetrable National Park is richly endowed with a bio diversity that goes beyond her native mountain gorillas, to a variety of 348 bird species and 220 butterfly species.

It is for this reason that CNN, during the news casters celebration of the Earth Day this week, named Bwindi as one of the most beautiful places in the world.

Make time off your busy schedule and visit Bwindi to appreciate the glaring beauty of the mountain gorillas and the diverse bird and butterfly species.