Gold Miners In Kasanda Trapped Beneath The Mine 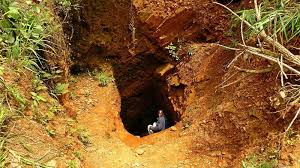 Hope to rescue two gold miners who were trapped four days ago in a gold mine pit in Kassanda District, is fading.

The miners were trapped inside an 80-feet gold pit at Lujingi D Village in Kitumbi Sub-county on Friday.

Police identified the victims as John Byamukama , 24, a resident at Kyaluwolera Village and  Nathan Muyingo, 24,  a resident at Lujinji D Village, Kassanda District.

According to Mr Norbert Ochom, the Wamala Region Police Spokesperson, a rescue exercise that started on Saturday morning, had not yielded results.

“Our rescue team is still on the ground, but it is quite difficult to find the victims alive. The rescuers are no longer hearing voices from the mining shafts,” Mr Ochom said on Monday.

Mr Daniel Mukuye, the Lujinji D village chairperson said that he learnt about the incident after a one James, also a gold miner, informed him that two of his colleagues had been trapped inside the gold pit after weak soil collapsed.

The said victims are alleged to have been operating illegally since the Ministry of Energy and Mineral resources stopped people in areas from Kasanda to stop mining.