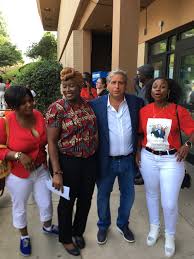 If you thought the Moses Nkonge Kibalama U-turn is all that Bobi Wine’s NUP has to worry about, just read this. Chaos has erupted in the Diaspora Chapter leadership prompting big-name Kyagulanyi proponents from the Canada coordination team to decamp and become promoters of the Renewed Uganda (RU) movement whose leader is Gen Henry Tumukunde. The disgruntled quitters from the Canada chapter include Morris Komakech, Henry Ssali (not the one of Matooke Republic) and Maurice Ogiri. Another even larger has threatened doing the same after Ameny Arao, who pioneered PP diaspora activities, bitterly fell out with PP/NUP leaders at Kamwokya accusing them of obscurantism, tribalism, corruption, lack of transparency and accountability. She specifically was angry with Joel Senyonyi and NUP SG Lewis Rubongoya who she accused of trying to influence Kyagulanyi to knife her from PP/NUP activities after she insisted that Kamwokya credibly accounts for the money she had been fundraising in the Diaspora through a bank account registered in the names of PP that was being operated in the US Corporation Bank.

PP/NUP insiders have intimated that in her numerous emailed exchanges with Kamwokya leaders, Ameny went as far as demanding that Fred Nyanzi Sentamu’s influence in PP/NUP decision-making be trimmed because the more he became powerful the more PP/NUP looked more like is very powerful and comes off as the defacto VP not because he is an extraordinary human being but simply because he is a biological brother to Bobi wine. She was uncomfortable with Nyanzi becoming such a big man originally in PP where he headed the informal sector department and later on in NUIP where he was registered with the EC as the founding secretary mobilization.

Ameny also raised corporate governance-related questions saying there was a lot of conflict of interest in the way the PP/NUP finance committee had been constituted. She was uncomfortable some members were poverty-stricken and were prone to using their membership on that committee to misappropriate funds to finance their MP campaigns for 2021. She argued the only way to prevent such happening was by way of ensuring that strong accountability systems and structures are put in place to shield the organization against arbitrary decision-making and financial imprudence. She now says SG Rubongoya was very uncomfortable with her views and worked with Senyonyi to influence Kyagulanyi to have her powers diminished as the Diaspora leader.

Ameny has since become very disgruntled and her defiance towards Kyagulanyi is gradually emboldening many other Diaspora coordinators to become bold and prepare to bell the cat some day by openly standing up to Kyagulanyi while telling him about his inadmissible excesses as a leader. Kamwokya insiders say that the Zoom meeting Kyagulanyi had with diaspora members last Sunday was aimed at de-escalation, reaching out and reassuring members all was well notwithstanding those intending to protest by departing into Tumukunde’s RU. But it’s also true that the recent alienation and demonization of Sam Walter Lubega Mukaku, a veteran Diaspora activist allied to DP bloc, demoralized many operating abroad and had the effect of radicalizing them into resenting some of the decisions coming out of the Kamwokya headquarters.

Cheered on by other diaspora coordinators, Ameny has also previously protested the physical and sexual violence that some big men at Kamwokya directed at PP/NUP national youth leader Angela Namirembe (in charge of Buganda) and yet perpetrators of that violence have remained unsanctioned up to this day. She was also concerned about a PP/NUP national leader (names withheld) whose untamed sex appetite has continued to cause war and intrigue among female activists. That the rampaging sexpest, who Kyagulanyi has been too fearful to confront, was one time caught red-handed by his own wife fondling a young lady who is vying the PP/NUP flag for the woman MP position in one of the Kampala Metropolitan Area districts. The wife was so furious, she threatened walking out of the home and calling a news conference to expose the husband who appeased her by attempting to formalize his marriage to her. The same Casanova, who is legendary when it comes to sleeping with nice-looking babes while promising them flag bearership, eventually dumped the babe for another one seeking to become woman MP in one of the greater Masaka districts.

The two babes both have Muslim names. One of them onetime leaked some of the info to one Diaspora coordinator claiming the legendary sexpest had rented for her an apartment where he dumped her without any furniture. She took photos of the empty house, where she was sleeping on the floor, and pleaded with the sympathetic diaspora coordinator to raise for her some dollars to buy at least a cheap bed from Bwaise. She had been sending many whatsapp messages to the sexpest wondering “which type of man are you that can’t take your wife for shopping.” These messages came to the attention of the official wife who confronted him and threatened to leave only to reverse her decision after Kyagulanyi’s sister called Cathy Namuleme (aka Senga) intervened.

The young lady was consoled later after being told that is how Mr. Sexpest treats babes in PP; exciting them by renting an apartment where he dumps you without furniture the moment he gets to sleep with you for a few times. She has since adjusted and accepted to live with him the way he is (after all he keeps telling his prey njagala nga bwendi/love me the way I’m). She is only stressed by one thing: and that the fact that Mr. Sexpest might be infected because one of the many PP/NUP babes he has been chewing tested positive after returning from captivity having been abducted sometime back ostensibly for political reasons. He claims he is okay and not infected because he never

There is also another sex scandal involving a top official (originally from DP bloc) who attempted to rape a patient at a private clinic/hospital in Kyengera owned by a strong NUP sympathizer. The gentleman rang the owner saying “Comrade I’m from Greater Mpigi doing candidates’ identification work for the party but I have to travel back tomorrow because I haven’t completed the work yet the money I was given from the Secretariat in Kamwokya wasn’t enough.” The owner allowed him space to sleep at his hospital because it had some beds (this was during the first 7pm to 6am Gen Museveni had initially imposed). Deep into the night, the bulky official suddenly woke up and began knocking on patients’ rooms claiming to be a medical attendant coming to check on them. Once the door was opened, he attempted to rape a patient who he realized was alone in the room. The patient made an alarm waking up other patients. She became so furious and threatened to sue the hospital prompting the owner to plead for an out of court settlement. The owner gave the complainant some money and the matter was abandoned altogether but damage had been caused. The owner of the hospital has since become so furious and doesn’t want to associate with such political activists anymore. PP/NUP Diaspora sources say its sex scandals like these that Ameny and other morally upright coordinators have been complaining about yet Kyagulanyi the Principal has been too cautious to sanction anyone fearing reprisals from such actors who have since become too powerful in the party.

The Ameny unravelling will most likely equally demoralize and impact on Kharim Ntambi, another pioneer PP/NUP Diaspora leader she has closely been working with to galvanize support for Kyagulanyi especially in United States of America. Ntambi was at some point the PP Head in the US. The duo some time back sent a long email demanding that Kamwokya submits written accountability for the money they had fundraised and sent in to enable PP to contribute charity (posho etc) to the national COVID taskforce, buy masks for the secretariat staff, pay allowances, facilitate work, buy stationary, pay legal expenses and even bail out or support youths that get arrested in confrontation with Gen Museveni’s security forces. They demanded receipts with authentication stamps showing which companies the supplies had been procured from. Many in Kamwokya saw this as kamanyiro (unacceptable familiarity) and opted to ignore Ameny for her inquisitiveness. She kept saying lack of authentic accountability would complicate her fundraising efforts among the Diaspora.

Naturally, stung by her endless inquisitiveness, some leaders at Kamwokya lobbied to the Principal/Kyagulanyi to sideline her to prove she wasn’t indispensable as she thinks. Subsequently, all willing contributors were encouraged to wire the cash directly to Kampala via electronic means or even mobilize money as opposed to channeling it through Ameny and her group members who were operating the PP Diaspora account in Bank of America Corporation. She claims that her concerns, which Kamwokya officially downplays as mere rants by an angry armchair activist, are widespread and shared by diaspora coordinators in other capitals of the world.  She is also concerned that some People Power supporters have been making ethnic attacks on her demonizing her tribe while over praising another coordinator called Joel Semakula who has always been very antagonistic to her. She has since been fired by Kamwokya, with Kyagulanyi’s approval and a one Herman Ainebyona has been appointed in her place. Senyonyi says replacing her with Ainebyona demystifies her claims that none Bagandas are discriminated in PP/NUP hierarchy. Not one to go down without a fight, Ameny will potentially be spilling more secrets in the coming weeks and months now that the gloves are clearly off.

The events in the story were written as were narrated by Ameny on different Media Platforms, the ex- People Power leader in Diaspora.