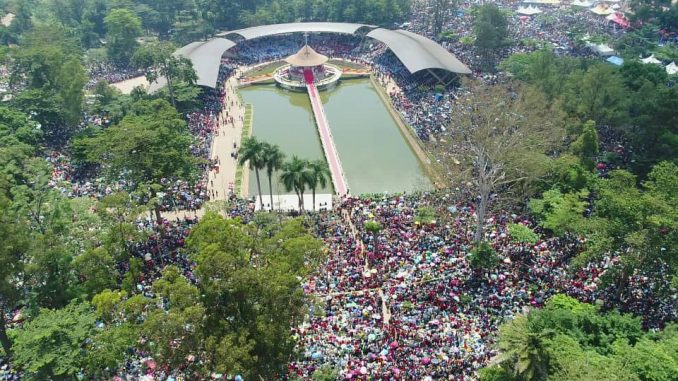 Uganda Martyrs day 3rd June of every year is a remarkable day in the lives of Ugandans especially Catholics but has drastically waved to be celebrated by all the religious sectors whose attachment hails from the young men that were martyred by Kabaka Mwanga for refusal to denounce their religious beliefs.

The day is for honouring  45 men who between 1885 and 1887 were killed in cold blood by Kabaka Mwanga II who interpreted their conversion to Christianity for defiance and adamancy to adhere to his rule.

The day for honouring these men has since become the biggest pilgrimage day in Africa. In 2017, over three Million people in estimates made it to Namugongo, last 2018 year an estimate of four Million People made it to the shrines in Namugongo. This year the number is expected to increase.

Pilgrims walk from all destinations in the world to make it to the place where mass is held in commemoration for these brave men who give a sense of Christianity identity to Ugandans and Africans.

The activity of the day is celebrated on a large square pond that is revered as the place where the martyrs’ executioners washed away the martyrs’ blood. The altar is built at the center of an island platform, accessible by bridge, and has a thatched-style roof. Other sides of the pond are lined with covered stands (pavilion like) for choirs and dignitaries. Few of the pilgrims are actually able to see the Mass firsthand, given the trees and topography and the large numbers that flock the place.

The celebrations of the day are going to be led by Gulu Arch Diocese which is expected to work with the state security organizations to ensure safety for the pilgrims but also lead the liturgical proceedings of that day.

Uganda as a country benefits in so many ways from the tourism image  and the economical sector especially of the strategically located business men in the areas of Namugongo and Kyaluwagyala a surbub near the Shrines.

The Explorer is going to follow up the events as they unfold from 25th May until 4th June, the day after the celebrations.